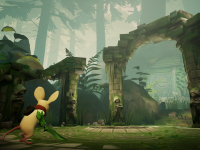 It may be time to put on your "remembering pants" to think back to a game announced at E3 named Moss. Maybe it still rings a bell for you or maybe you remember there being a title named that which was shown off from Polyarc and featured an adventurous mouse as the lead. Remember it or not, here we are with more for this PS VR title and just what to expect if it makes the February of this year release date that Moss currently has set for itself. There is still time for the release but not much to get the word out if that is the case. I guess that is why you are here though, so let us dig into what we have for the game now.

Moss looks to put us as the player into a world where we are "reading" a book that features a mouse named Quill. Quill is on an adventure and we are here to go on it with her. Well, as the latest gameplay will show, not just go on it with here but also join her as an active character and not just someone pushing the control stick around. There is still plenty of that to be had in Moss, but as you will see in the latest video for the game, some of the control will have us moving the DS4 in the virtual space to help Quill and interact with the world in a different way. The idea is to make us more of an active role in the game and not just a passive observer. I am not completely sure on why it needed to be in VR, but it is and still looks like an interesting thing.

You can see the latest build of Moss' demo in action here where the players can look around and perform many other tasks besides just looking. Things like grabbing enemies to guide them around the stage as needed or actually manipulating the levels to help Quill traverse the land. It still looks like a puzzle/platforming title, just with a few of the cool gimmicks that VR can allow us now. Have a look and then get ready to see if Moss will make it to us in the next few weeks before February is finally up.

Let's play Moss on PS VR! This adorable adventure game puts you in a fantasy world, aiding a courageous mouse on her journey through bright forests and damp caves. Moss launches on PS VR soon.

What are your thoughts on Moss now that we have a look at it in motion and not just fancy trailers to pull on our feelings? Do you think that the game truly needed to be in VR here or is it still too soon to figure that out based on the footage we still have? Does this look like another game you need to add to your collection or will you sit back and hope for it to come out without the need of PSVR, if ever? Let us all know down in the comments and then discuss. For more on Moss, and hopefully a solid release date, be sure to check back in on the site here to make sure you have seen it all.