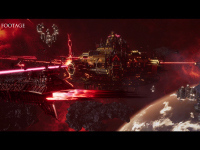 Just last week we had the announcement that Battlefleet Gothic: Armada 2 was in the works and coming to PC sometime this year. Currently that is still all going as planned and Tindalos Interactive is working hard the game still. Flash forward to today and now we have a new developer diary for Battlefleet Gothic: Armada 2 that aims to give us all a bit more insight into how the team is doing this and just what we may be able to expect. Just as developer diaries are supposed to do. Usually they are also here to give those looking forward to the game a bit of gameplay mixed in to further excite and entice us to keep following along.

What we have just below for you is the developer diary that more or less goes over all of the details we had last week for Battlefleet Gothic: Armada 2. The game will have twelve different factions from the tabletop game. It will take place in the latest story of the Gathering Storm and the 13th Black Crusade. Also, Battlefleet Gothic: Armada 2 will continue the grown of the gameplay from the first title in the series to keep the improvements flowing. Sadly, there is not much in the way of new gameplay but there are a few little bits. Have a look for yourself down below and get the few small looks that are in there though.

Romain Clavier, CEO & Game Director of Tindalos Interactive, and Aurélien Josse, CEO & Art Director, describe their ambitions and how they are making Battlefleet Gothic: Armada 2 better than its predecessor in every way. For the first time in a video game, the latest story development in the Warhammer 40,000 universe, Gathering Storm and the 13th Black Crusade, will serve as the canvas for the story of several dynamic campaigns. The game will also bring all 12 factions from the original tabletop game, playable in both solo and multiplayer, including the highly anticipated Necrons and Tyranids. With bigger battles, refined gameplay, improved multiplayer modes and features for a better and more balanced online experience, improvements across the board and even more customization options for fleets and ships, Battlefleet Gothic: Armada 2 promises to be the ultimate Warhammer 40,000 space battle experience!

Finally get a sneak peek of the creative process at Tindalos, a team passionate about the Warhammer 40,000 universe since their childhood - a passion that followed them to this day and is evident in their work.

Are you more or less excited for Battlefleet Gothic: Armada 2 after seeing how the team is going to "forge" the game? Were you able to see any of the aforementioned improvements in the gameplay bits we did get or was there so little you could not see a new thing? Which faction are you excited to hop in and join again? Give us your feedback and discussion down in the comments. For more on Battlefleet Gothic: Armada 2 be sure to stick close to the site here. We will keep updating you with everything that we are able to scrounge up for you.