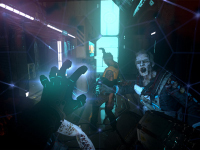 It has been over a year since we first heard about The Persistence coming to PS VR and it looked pretty creepy and ready to put some fear into us in the new landscape. The team over at Firesprite has been putting in a whole lot of work and now they are glad to tell us that we will finally get to play the full game on July 24th this year. At least if you are a PS4 owner with the VR set up that is. Nonetheless, The Persistence is coming at us and with it will bring a new stealth FPS horror game into the mix of VR. Something that the platform needs to have more of in my not so humble opinion. But I digress…

In The Persistence, we will be taking on the role of Security Officer Zimri Eder as she wakes to find the titular spaceship overrun with mutated and violent clones of the former crew running the thing. You see, the ship has malfunctioned and has been popping out these horrible things for reasons and it is up to use to stop it, bring normalcy back to The Persistence, and then find a way back to Earth. All while using the VR movements to sneak around and get the drop on some of these mutant clones. Or to escape from them if that is how you are looking to make it through the game. Running and gunning is an option too as long as you can find the weapons replicator and keep yourself armed.

Stealth may be the better option though as each time you die in The Persistence, not only are you brought back as a clone of your former self, but the ship's craziness goes into the fact that it reshapes each level with each new clone. You can read that as the levels are procedurally generated at each death and then filled back in with more mutants. Why this would be an option on a spacecraft I do not know, but that is how it is on The Persistence. So the better option is just not to die and keep going through everything in a single run. At least if you can.

The Persistence is procedurally generated. Every time you die and a new character is awoken by IRIS, the layout of the ship has changed. Every life will play out differently, with different enemies to face, items to find and power-ups to collect.

Survival requires you to be stealthy and VR is the perfect match for this. Sneaking around and hiding behind cover; it's second nature in VR to just lean round or peek over cover to gain the advantage.

Your friends can also help out by connecting to the game with their phone or tablet and hacking into the ship's computer. Once in the ship's system, players get to control doors, freeze or distract enemies, disable traps and find hidden items to scavenge for the VR player. Be aware though, sometimes the tablet player gets rewarded if you die, do you trust your friends?

Surprisingly, The Persistence will also have a co-op play option built in that will allow other players to "hack" into the ship via the Play Link option from their phone. From here they will be able to open doors, turn on/off traps, lure enemies, or spawn them if they are feeling saucy. There is some form of benefit to the outside player when you die in The Persistence, so you cannot fully rely on them unless you are both in it to win it together. Then again, if they were a true friend why would they try to screw you over for some fictional points in a game? Maybe Firesprite will have something fun to offer so we can keep the gameplay lively.

How are you feeling about The Persistence as it all looks and stands right now? Does it look like a title you will be adding to your PS VR collection this July or one that you will skip? Do you think the co-op play will be a great option or something that will help exploit certain things in the game for the savvy players out there? Let us and the world know down in the comments and then discuss. For more on The Persistence, be sure to keep checking in here. We will keep the information flowing as best we can and you will not want to miss out.