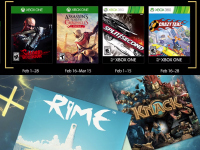 A new month is almost on us here with February and that means new video games that we are going to get for free. Well, video games that you will get for free if you are part of the PlayStation Plus or Xbox Gold services. If you are then you may be in for a treat as the list of titles going live starting next month is here and we have it for you. Again, we get to expand out titles on the Xbox One and PS4 without needing to make any extra spends at our local stores.

A few more solid titles to add to the mix here indeed. Not the rumored video games that some were hoping for, but still some solid titles. I know I missed out on Knack the first time around so I am glad to see it here for more to enjoy. The truly solid title I see there though has to be Split/Second for me though. I loved that game when it first came out and it was one of the few video games I knew I would miss when the studio was shut down a little while back. If anything, make sure to check that one out as it is a blast with the pun totally intended for those who already know the game.

Here is the list of games we will all get for our PlayStation systems starting on February 6th of 2018.

Here is the list of games we will all get for our Xbox systems starting on February 1st of 2018.