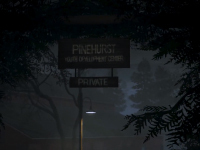 At the time of the original posting, this Jason's stats were not available. They have been made available now. Hold on to your butts, arms, and head as Friday The 13th: The Game is getting another bit of content added in to the game and for the low-low price of FREE. For those who have thought it, it looks like IllFonic has not stopped their work on the game and are continuing to bring us more to further expand everything for us. This time we are getting another new Jason and a new map based on another major location from Friday The 13th's history. Not too surprising given the game and the fact that Gun Media is being given everything available for the franchise, but nonetheless we are getting Pinehurst Youth Development Center to stalk and hide in.

Given the new map given to us, you can easily make the assumption that we are getting the Jason from Friday The 13th: A New Beginning here and all the fun that comes with that. Fans of the franchise might know what that means, but those who are not can look to see a not-Jason as being this new Jason. In the film, it was shown that Roy Burns was wearing the mask and doing all of the killings and that could mean some different things for this Jason. In the following trailer, you can see he looks to be a bit faster than the others we have had and looks to be sporting hedge clippers. Another weapon we have seen used in the Friday The 13th film and getting used to its full extent here.

Friday The 13th: The Game — Jason V And Pinehurst

We are happy to announce, at no additional charge, a NEW Jason and map coming to Friday The 13th: The Game. Are you ready to revisit the Pinehurst Youth Development Center?

Along with the new map is, of course, Roy -ahem- Jason Voorhees as he was seen in A New Beginning. This version of the king of slashers comes equipped with a deadly set of gardening shears and three new weapon kills to trim down any counselors that cross his path.

Coming January 30th at no additional cost on Xbox One, PS4, and PC!

Did you expect to be getting another Jason for Friday The 13th: The Game and for free or did you think it would have been another paid DLC bit? How about the new map we are getting and do you think we will get some other iconic views from the film in this version of it? Do you think that this Jason will move the fastest yet hit the hardest given the films or will he be another blending to keep things mostly in line? Let us know your thoughts on all of this down in the comments and then discuss. When more for Friday The 13th: The Game is put out there, we will have it here. Keep checking back in to see it all and stay up to date.