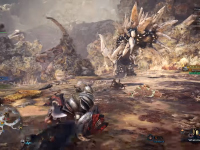 We have another location to look at for Monster Hunter: World, as we get ready for the short wait until this addition to the Monster Hunter franchise drops

The beta for Monster Hunter: World is over and we will see it land on the PS4 and Xbox One here on January 26th, but that does not mean we are done getting small looks at the game and its world. I say this as Capcom has brought yet another area of the game's world to us with the Rotten Vale. An area that looks to house some of the viler and putrid monsters out there for Monster Hunter: World. At least based on the way it is all set up and that one of the main monsters covers itself with the bones of its devoured meals. Why it would do that is beyond me, but it is the case and we get a bit more to look at for the game.

It also looks like we are being pushed to keep using the other major monsters in Monster Hunter: World to do the dirty work for us in this new video here as the player and announcer do just that. At one point, the player kites another larger monster into a den of smaller ones to have them all fight it out and then go in pick up what is left. Seem more like Monster Vulture: World here than Monster Hunter: World if that is going to be a main tactic to use. Have a look for yourself though and see just what I am talking about.

All-new gameplay of the putrid and vile Rotten Vale in Monster Hunter: World.

Monster Hunter: World comes to PlayStation 4 and Xbox One on January 26th, 2018 with FREE content updates starting this Spring.

Having played the beta and a bit more of Monster Hunter: World, I will say that the game does look pretty and unique, but there was something missing at the end of the experience. For me, it was the fun factor. I pushed myself to keep giving the game a try, and maybe it was just because of the beta settings, it seemed like things were more sluggish on the player side and not too helpful on the fun side. It could have been just me, but it feels like we are being held back in general when it comes to the combat and the video here is nowhere near the experience I had. Again, maybe it was just for the beta, but it feels like everything needs to be sped up for the player or slowed down on the monster's side. Then maybe it would fully grab my attention, as all of the visuals and design have to date.

What do you think of the Rotten Vale that we have here for Monster Hunter: World? Does it look like a grotesque area that Capcom was striving to bring us or just a nice and pretty skin placed on a similar map out there? Did you get to play the beta and have a similar experience as I or did you fully enjoy every minute of it and want to dive in when it launches at the end of the week? Give us all of your feedback and more down in the comments and then discuss. We will keep covering Monster Hunter: World as best we can on the site as we press forward. Keep checking back in here to see all of those updates and new bits of information.