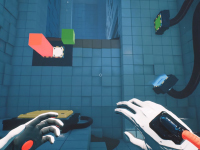 A new gameplay video for Q.U.B.E. 2 has been released and it gives us a fun look at new puzzles as well as a slight update as to when Q.U.B.E. 2 will launch

More gameplay for Q.U.B.E. 2 has just been dropped out there and it gives us a bit more of the new environments and puzzles we can expect in the game. We should have known this would be the case from Toxic Games already, but now we have visual proof that things are going even more off the deep end with it all. It makes all of the sense out there as it is a sequel to a rather well put together game like Q.U.B.E. was. They do need to make this one bigger and better for the PC, Mac, PS4, and Xbox One as gamers have been wanting just that. Maybe it is just me though as I know that is what I have been hoping for since the last title dropped.

Looking at the latest gameplay for Q.U.B.E. 2 it does look like the world is a bit more open. At least open in the visual sense of the word as the world has that feel but I am sure to keep the gameplay on track it will be linear as before. There is no point in having puzzles to move from one location to another if you can just bypass them by jumping or walking around the locked doors. I just hope that we are not going to be getting just a bunch of invisible walls out there and will see some true reasons as to need to complete the puzzles. Outside of just beating the game and such.

Q.U.B.E. 2 is the sequel to the hit first-person puzzle game, Q.U.B.E. You are Amelia Cross, a stranded archaeologist who has awoken among the ruins of an ancient alien landscape. With the distant help of another survivor, you must manipulate the structure of this mysterious world and find a way back home.

Up to now there has not been a solid release date for Q.U.B.E. 2, but as it sounds we should be seeing Toxic Games wrapping it up and shipping out there in Q1 of 2018. That would be considered Early 2018 as we have been told time and time again, but that is not a solid date as of yet. There is supposed to be an updated date given out soon though so we will be on the lookout for just that and hope it is in the next month or two so we can jump back into this fun puzzle game as we wait for others to launch or even get announced. Not that Q.U.B.E. 2 is not great just on its own though.

What are your thoughts on the new gameplay we have here for Q.U.B.E. 2 and do you like the direction it has gone? Do you think we will have solid reasons for the more open environments or will it be plagued with invisible walls to keep us on track and on the way to the end? Do you think these puzzles are going to be extremely more difficult than others we have seen in the past or will they have the same scale we know and fell in love with? Give us answers to all of that and more down in the comments. Also, be sure to keep checking back in on the site here to find out everything you want to know for Q.U.B.E. 2. Hopefully a release date here soon as well.