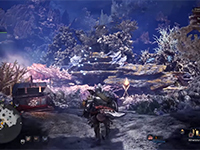 New gameplay for Monster Hunter: World has been released and this time it looks like Capcom is taking us to new lands in this one to take on some other big monsters in the game. Here we have a look at the Coral Highlands that will give us the feeling of being in an underwater landscape while not actually being in that setting. It is a pretty location and looks to be filled with all kinds of extra monsters that we should be expecting in a title named Monster Hunter: World. I am sure there will be many more like this when the game launches on the PS4 and Xbox One on January 26th. Maybe the upcoming beta will show off even more but this is as it is for now.

Maybe it is the way the gameplay here is presented, but it does look like the combat in Monster Hunter: World can be a bit disjointed for my tastes as it is hard to see how the player is actually trying to take down the one monster they are aiming for. I get that they are trying to show off more of the world and a bit of the combat, but it feels like the player had trouble focusing in on one beast and opted to just run around flailing as the character looks to do when they jump off cliffs. It is odd to me, but I have yet to get some solid sit-down time with Monster Hunter: World so it could be a lot different than I am expecting from just watching the gameplay videos we have been getting.

Have a look at the latest gameplay for Monster Hunter: World here and see the new lands we will be exploring and hunting through. Maybe this is what Capcom wanted to show us or maybe it was just something to get us all excited to play. You can come to your own conclusions here for now though.

All-new gameplay of the stunning but deadly Coral Highlands in Monster Hunter: World.

Monster Hunter: World comes to PlayStation 4 and Xbox One on January 26th, 2018 with FREE content updates starting this Spring.

What do you think about Monster Hunter: World's Coral Highlands here that we have to see? Do you think that it looks like it will be a fun area to play through or will the colors get distracting after a while? Does the combat look a bit disjointed here to you as well or is it just to show off the monsters and area better for us all? Let us know down in the comments and then discuss. For more information on Monster Hunter: World you will want to keep checking back in on the site here. We will try to keep you as up to date as we can before launch.