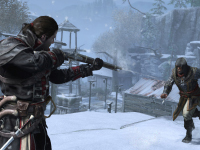 Rumors were abound back in November that we were all going to be seeing a remaster of Assassin’s Creed Rogue. It started with some listings and ratings popping up out there but here we are now and Ubisoft has officially announced that it is going to be a thing for the PS4 and Xbox One. Not only will this remaster be a thing, but we will also be seeing this Assassin’s Creed Rogue hitting us all on March 20th. Not too far off and something to help carry us over if we needed more of a fix in the franchise while ignoring the other games that are coming out around the same time. If anything, it will be something to pass the week before Far Cry 5 hits.

Now that the rumors have been confirmed for Assassin’s Creed Rogue though, what else has been confirmed for it all? Obviously, it will be getting the upgraded textures and such so the systems that can do 4K will pump the game out at 4K. It looks like we will also be getting all of the DLC that came along with it during its original release. Also, we will be able to get a feel for a different path that Assassin’s Creed could take instead of the same old "keep the people free-willed" story we always get here. You know, because we are taking on the role of an Assassin who has turned Templar and is hunting down all of those other Assassin's out there. Something a bit different that was missed back in 2014 due to the system shifts.

Ubisoft announced that Assassin’s Creed Rogue Remastered will be available on March 20th, 2018, for PlayStation 4 Pro and PlayStation 4, and across the Xbox One family of devices, including Xbox One X. Assassin’s Creed Rogue Remastered will include all of the downloadable content from the original game: two bonus missions (The Armor of Sir Gunn Quest and The Siege of Fort de Sable), as well as the Master Templar and Explorer packs, which contain weapons, customisation items and special outfits, including Bayek’s legacy outfit from Assassin’s Creed Origins.

Created by Ubisoft Sofia, the studio that developed the original Assassin’s Creed Rogue, this remaster further enriches the franchise’s current-gen catalogue, and the game will shine in 4K on PlayStation 4 Pro and Xbox One X (and run 1080p on PS4 and Xbox One). Thanks to the higher resolution, improved environment rendering, visual effects, and textures, Assassin’s Creed Rogue Remastered will offer an even more beautiful and immersive gaming experience that invites fans of the series and new players alike to discover, or rediscover, Shay’s adventures in 18th century North America.

Are you happy to see that Assassin’s Creed Rogue is actually getting a remaster or was it something that should have been left in the past? Do you think that this will be the version we should have had back in 2014 or did it come out at the right time and will be here for those who want to have the "full experience" now? Do you think that it will actually look better than it did years ago or will the upgrades be barely seen? Let us all know what you are thinking down in the comments and then discuss. For more on this remaster for Assassin’s Creed Rogue though, keep checking in on the site here. We will keep you as up to date as we can.