Feudal Alloy Will Be Bringing The Metroidvania-Style Gameplay To Almost All Platforms
by David 'Hades' Becker [ Thursday, 4th of January 2018 - 10:00 PM ] 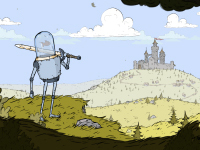 If you have been jonesin' for a new Metroidvania-style game to come our way, then you are in luck as we have some new updates for Feudal Alloy to give you here. Granted, if you have been following along with Attu Games since the teaser video first popped up, you may know a bit of this already. This is here for all of you out there who have yet to hear about Feudal Alloy and see what it is going to be bringing to the PS4, Xbox One, Switch, PC, Mac, and Linux platforms. That sure feels like a lot there but it looks like the team has it under control as it is still slated for a Q3 2018 release date according to the last check I made on their information site. Maybe things have progressed since then…

As I mentioned, Feudal Alloy is a game in the same vein as the titles that coined the Metroidvania genre. We take on the role of Attu, an "ordinary robot farmer," who wants to save his village from an attack by some outlaws. They did some damage and took a lot of things that were not theirs and it is up to Attu to get them back. At least if you have the skill to get him about the world and use the weapons at hand. You know, the usual shtick that comes with all of this. Just all done in a wonderfully drawn world that you can see in action just below. Have a look and then see all of the other things that should be coming to Feudal Alloy when it finally launches out there.

Attu is an ordinary farmer robot who lives in a small cottage in the sunflower fields. He has been living a simple but pleasant life until a bunch of outlaws attacked the village, stole their oil supplies and burnt his house. Fortunately, he managed to grab his old sword and fled into the woods.

What do you think of Feudal Alloy as it all stands here? Do you like the look and feel of it all or do you think it is missing something? What do you think all of the Loot will be and do you think it will have a huge impact on how the game plays out or will they just be fun collectibles? Give us all of those thoughts down in the comments and then discuss. For more on Feudal Alloy, as it comes at least, be sure to keep checking back in here. We will keep all of the updates coming as we get them.