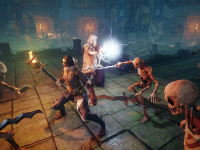 There is more Hand Of Fate 2 on the way out there for those fans who have played, beaten, and enjoyed the game. Given the popularity of the franchise that Defiant Development has here, it makes perfect sense and players on the PC version of the game can get said DLC right now and add in The Dealer as a new companion to the game. PS4 and Xbox One owners of Hand Of Fate 2 will need to wait until next year to get it, but seeing as it looks like it is a free bit of DLC here just for owning and beating the game, can you really complain? Well, of course you can, it just would not make much sense at the end of the day.

Anyways, this new DLC for Hand Of Fate 2 will bring you the option to add The Dealer into the mix as one of your companions in the game. You will need to have finished off the final challenge of the core game to do this, but then you will be able to get all of those fun quips and insults thrown at you while he is part of your party. That and all of the ranged attacks and snares he will add to the combat on your side when replaying Hand Of Fate 2. I am curious as to how that will work in a "third-person" kind of way, but it is what it is and there is no changing that now. Not that I can see why one would want to.

Hand Of Fate 2, the acclaimed action RPG from Defiant Development, will deal in multiple additions of downloadable content. The first free piece, arriving on Steam, Wednesday, Dec. 20, 2017, will add the Dealer as a new companion character. Like all DLC, this will appear on PlayStation 4 and Xbox One in 2018.

The Dealer will join the adventuring party once the player successfully completes the final challenge. A master of the Game of Life and Death, he can influence any tabletop gambit, though at great personal cost. In combat, the Dealer employs an arsenal of ranged attacks to ensnare his opponents.

The Dealer will deliver new quips and insults, evoking responses that have made this supporting character the series' most memorable personality. Anthony Skordi, best known in the world of games for bringing to life characters such as Mass Effect 3's Leviathan and Admiral Garrick Versio from Star Wars: Battlefront II, once again lends his vocal talents to voice the Dealer.

What do you think about The Dealer for Hand Of Fate 2 becoming one of your party members now? Do you think we will get some great quips back and forth in other ways besides just with our character? When do you think the console players will get a chance to experience all of that? Give us all of those fun thoughts down in the comments and then discuss. We will keep bringing all we can for Hand Of Fate 2 as it is updated. Be sure to stick around here to see it all in due time.