Another Portal Game Is Kind Of Coming With Bridge Constructor Portal
by Duke Searles [ Wednesday, 6th of December 2017 - 06:00 PM ] 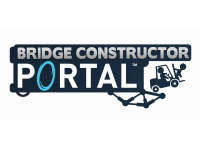 It has been a while since we had anything truly new for the Portal franchise in terms of a full game. It is crazy to think that it has been six years since the last full entry into the IP and at most, we have had little links back and forth with characters, items, and Easter Eggs to entice us all a bit more. If you are like me, you are sitting there hoping for a full new title into the franchise, but for now we are going to have to sit and take games like what Headup Games has for us here. Now we have Bridge Constructor Portal to look at and get another taste of the IP through their other game's mechanics but with all the fun GlaDOS and Aperture bring to the world. All on December 20th and for the Mac, Windows, Android, and iOS platforms. PS4, Switch, and Xbox One to come in 2018.

While this is not a full new game with the portal gun, Bridge Constructor Portal does give us that feeling with the core gameplay of Bridge Constructor. More or less, we are going to be building bridges and structures to help flowing vehicles to get from point A to point B but with some of the mechanics we had in Valve's title. Not only the Blue and Orange portals, but also so of the rebound and bounce mechanics. I am also going to guess that there will be some of the other implements from the larger title, but this is all we can glean from everything we have here. Have a look at the announcement trailer and screenshots for the game and then get ready to hop back into the world of Portal through this title. Now just give us a third one.

"Hello and welcome back to the Aperture Science computer-aided enrichment center."

For the last year we've been secretly working in our underground labs on the next iteration of the million-selling Bridge Constructor series. This new stand-alone title will release on PC, MacOS, Linux, mobile devices, and console, and fully embraces the Portal license, one of the most beloved video game franchises of the last decade.

Bridge Constructor Portal will blend the laws of structural engineering and technology straight from Aperture Laboratories into an exciting new game experience, all under the demanding gaze of GLaDOS.

Bridge Constructor Portal will be released on December 20th 2017 for Windows, MacOS and Linux as well as for mobile devices. The console versions will follow in early 2018.