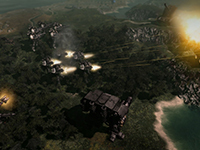 Good news for those who have always wanted a good 4X Strategy game set in the Warhammer 40K universe but have always been left wanting. It looks like prayers may be answered as Slitherine and Games Workshop are teaming up yet again to bring us all a new PC title in 2018 that will try to deliver just that. Here we are now to show off and announce Warhammer 40,000: Gladius and all of the fun that it should be bringing to fans of the franchise through four factions and all of the darkness that the game's world is known for. Think of all you can save on those miniatures now if it actually all pans out just as they want it to.

Details are still a bit sparse on Warhammer 40,000: Gladius, but we do have a nice new look at just want the game could entail in the following trailer. It is very little, but that is just for now as they are already planning a full stream on December 7th where they will go into further details to get all of those Warhammer 40,000 fans all riled up. As if a game in this universe using something that looks like the same gameplay as StarCraft would not do that already. But hey, we are gamers and we need to know and see it all before we actually throw down the cash. At least in most cases. Have a look at it though and see if it gets your blood all boiling up for some fun in this universe again.

Warhammer 40,000: Gladius incorporates the dark, gothic, far future science-fantasy setting in ways never tried before. A brand new, deep storyline has been created to combine elements of 4X gameplay with a combat-focused system. The evolution of technology, construction of infrastructures and exploration of an unknown world, goes hand in hand with the management of military resources, including heroes with special abilities and mighty war machines.

Warhammer 40,000: Gladius has been designed to give four totally different gameplay experiences, depending on which factions players choose. Space Marines, Astra Militarum (aka Imperial Guard), Orks and Necrons each have dramatically different characteristics, both in how they develop and expand and in the way they interact with allies and enemies. This gives the game virtually endless replay value and players the chance to play out the same experience in totally divergent ways.

In Warhammer 40,000: Gladius there is also a massive difference between playing solo or in multiplayer. The deep storyline was created from scratch to allow players to explore an entire world and lead the expansion of an empire from the ground up. The discovery of ancient artifacts and the custom-crafted quests will reveal the secrets of the planet and its mysterious history as the story progresses.

How excited are you to hear that Warhammer 40,000: Gladius is announced and bringing something many fans have been hoping for over the years? Do you think this will sate many of those out there who have been hoping for a 4X Strategy title in this setting or will it just be "another game?" What do you think of the four factions that we have here and how they look to be treated so far? Let us all know down in the comments and then feel free to discuss. For more on Warhammer 40,000: Gladius though, keep checking back in here as we will keep all of the information flowing out there for you. Do not miss out on a single bit of it all.