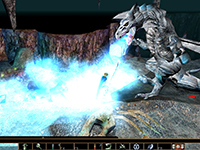 It looks like fun from fifteen years ago will be on its way to us here soon as Neverwinter Nights: Enhanced Edition is coming and coming soon to a PC near you. Yes, you read that correctly as Beamdog is packaging it all up and enhancing it all to work well with all of these modern screens and systems. As if we already did not have enough to play out there, now we can add a new version of Neverwinter Nights into the mix with all of the DLC and 4K visuals that one would hope for in an enhanced edition and version. We truly need more time in the days, weeks, and years to be able to experience and have fun with all of these games now and this one will add a whole lot more time into the mix. At least if it looks like your jam at all.

Have a look at the teaser for this Neverwinter Nights: Enhanced Edition just below and then figure out if you want to pre-order it for a chance to gain early access or just add it to your wishlist to know when the actual release date lands. Just as one would not really assume it would be for this title.

“Neverwinter Nights was a unique game that distilled the essence of Dungeons & Dragons and allowed players to build, share and act as Dungeon Master for amazing gaming experiences.” said Trent Oster, Beamdog CEO. “I think this unique combination makes Neverwinter Nights one of the most versatile role-playing game experiences of all time.” Neverwinter Nights: Enhanced Edition combines the familiarity of the Forgotten Realms with new features like advanced graphics shaders, 4k support, updated translations (French, German, Italian, Polish and Spanish) and the fan community’s most requested bug fixes.

The release is accompanied by a Digital Deluxe bundle which includes three of the original premium modules (Pirates of the Sword Coast, Infinite Dungeons, and Wyvern Crown of Cormyr), two soundtracks collecting all of the original music, and a new portrait pack. Each piece of DLC will be available to wishlist on Steam. All content will be available on Windows, macOS, and Linux. “I invite everyone interested in the future of Neverwinter Nights to join the Beamdog forums,” said Oster. “We hope it will become a new home where you can speak directly with the development team. We need to know what you want to see Neverwinter Nights become, and we'll do our best to meet and exceed those expectations.”

So, maybe it is just me, but the Neverwinter Nights: Enhanced Edition does not look like things have been truly enhanced here but have just been able to be played on the higher definition screens. I know this is not a full remake of the title, but one of the features listed here is that all of the visuals have been enhanced not only to work for a 4K screen, but also it was supposed to have updated shaders and everything to make it crisper. It all still looks like the same thing from 2002 though. I mean, as long as it is still the fun Neverwinter Nights we know then it does not matter how it looks, but it just seems wrong to list it has all enhanced visuals when it truly does not. I may be a bit jaded on this though…

What do you think of the Neverwinter Nights: Enhanced Edition as it stands right now? Is this a game that you wanted to see get another edition mixed in with the ability to play in "high-def" or should it have been left with the fond memories in our hearts? Do you think it is weird that you can be randomly selected for early access if you pre-order the game or should that just be part of it all? Let us all know what you are thinking down in the comments and then discuss. For more on anything Neverwinter Nights though, keep an eye on the site here. We will keep any of these updates flowing out to you and you will want to know it all.