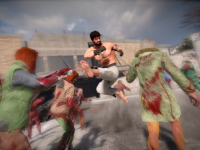 More of the Capcom characters we are going to get to "play as" in Dead Rising 4 have been revealed and expanded upon here. Of course, I mean all of this in terms of the new Capcom Heroes mode that will be coming to the game on December 5th for those who already have the game on the Xbox One or the PC, and also those who pick up Frank's Big Package for the PS4 on the same date. It is all a free update for Dead Rising 4 and will be adding in a plethora of characters for Frank West to cosplay as and pull off some of their iconic moves on the zombie hordes out there. Now we get to add a few form the Street Fighter franchise into the mix.

This should not come as too surprising for anyone when it comes to Dead Rising and how the developer does things. Now we can confirm that M. Bison, Akuma, Cammy, Hot Ryu, and Mecha Zangief will all be part of the fight and fun in the game. Or at least in this mode. Either way, we will be pulling off some of the famed moves on the zed that are out there and breaking a few backs and necks along the way. It would seem that Mecha Zangief would be the safest in the bunch here, but that would be breaking Dead Rising 4's mechanics if there was no risk of injury to a solid metal man. I am not the zombie king after all…

Nonetheless, have a look at how these characters are joining the ranks of Dead Rising 4 and helping Frank end a few more of the walking dead out there. Well, at least their likenesses as we wait for the next batch to show up and then the actual DLC to finally launch on December 5th. It is fun to watch the game come all the way around again, is it not?

Frank West takes on the look and abilities of some of Capcom's most famous Street Fighters in the upcoming Capcom Heroes update. This game mode is free to all owners of Dead Rising 4 and comes with the PlayStation 4 release Dead Rising 4: Frank's Big Package.

What do you think about these five characters showing up in Dead Rising 4 in the this mode? Would you have rather seen a different line up of characters or do these fit with what you were hoping for? Who else from Capcom's list do you think will join the mode or will it be main these Street Fighter characters and the other main "Big Names?" Give us all those thoughts and then discuss it all down in the comments. For more on Dead Rising 4 be sure to keep checking in here on the site as we will keep the updates flowing. Hopefully sooner rather than later, but video games are fickle.