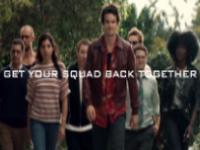 We have a new live action trailer for Call Of Duty: WWII and also a look at just where the Call Of Duty franchise may be going

This is going to have to be one of the stranger updates we have had so far for Call Of Duty: WWII, but it is an update and something new to spy on just a few weeks before it comes home to our PS4, Xbox One, and PC. I wish I could say it is all about some sweet new gameplay that Sledgehammer Games has for us here, but it is mostly all about what Activision has for us to spend more money on the game and get us all to pre-order it well before launch. As if you needed further reasons to do that given that this title is taking us back to the Call Of Duty and looks to offer up some of the new things we should be expecting in future titles. At least if it all plays out as well as everyone is currently hoping for.

Anyways, first up we have a new Live Action trailer for Call Of Duty: WWII that is telling you to get your team back together and ready for this launch as it will be needed. As if you had already put your team aside and split ways like you will see in this Live Action trailer. I am also not sure we can call it that either as there is not anything in the way of actual gameplay and is more of an ad to purchase it all. I promise it will all make sense after the video, but this is what is here for now for Call Of Duty: WWII. Have a look.

Call Of Duty is returning to WWII, which can only mean one thing: it’s time to get your squad back together. Follow a team as they gather their friends for the most epic battle yet. Featuring “Figure It Out” by Royal Blood.

Usually we do not like to show just the ads for games, like we have here for Call Of Duty: WWII, but this is the way we are going to lead into the real update here. The above ad tells you to gather up your old teammates to get ready for some sweet online gameplay, but this does not sound like what Activision would want you to do. At least if their most recent patent works out just as it is explained. While it is being claimed not to be in this version of Call Of Duty, it looks like the engineers over there have planned out a way to make it likely for you to shell out more cash while you play the multiplayer, and possibly single player, portions of the game. Here we go with another way to make micro-transactions "hot."

A recently granted patent for the publisher has been revealed to use algorithms and playstyles to "trick" you into spending more real-world money in the digital world the game has for us. Yes, you just read that. This new patent is for a system that will use all of this data to pair players up with "Experts" or "Novices," depending on which side they are falling on, to try and encourage the novice players to spend real money to purchase items that could make them play as well as the experts. More or less, if your K/D ratio sucks, you will be forced into matches where you will have players with better ratios so you can see what you are missing out on because you do not have the same gear or perks. All in the guise that you will think, "Hey, I need these too so I can play like them." It is a bit more complicated than that, but that is the basic gist we have here from the patent so far.

System and method for driving microtransactions in multiplayer video games

It will be repeated that even though work on this functionality has been going on since 2015, it is stated that it is not in any of Activision's current titles or in the upcoming Call Of Duty: WWII. That is not to say that if they get it perfected it will not be part of a future update from Sledgehammer Games, but currently, it is all "in the labs." So keep that all in mind when you are not playing with the squad you should have been assembling or reassembling in the above ad. It could bite you in the end and also trick you into making purchases that you do not really need to make as it could just be current skill level and not just the gear and perks of your fellow players. Then again, what gamer out there is not going to use that excuse when they are getting hammered in a match.

Personally, I think this kind of functionality should be kept out of things. Sure, we all know that video games are a business and exist to make the developers and publishers money, but these kinds of tactics are the same kind of things that Casinos and Gambling Halls use to keep players coming back and sinking more money into something with almost no return. Even though it is out there, it feels like it is a deceptive action to make even more money. Hopefully, the claims are true and it will not be part of Call Of Duty: WWII in any way, but time will only tell and it will be most likely hard to spot for a while if it does make its way in. So get on out there and get your team together and stay "in the know" just in case this is more than just a passing update.

How do you feel about this patent news for the publisher and do you think it could make it into Call Of Duty: WWII before or after launch? Do you agree that it feels like a deceptive tactic to make more money or will it be used to get poor players to see what they are doing wrong or what they need so they can be successful? How do you think this will affect the competitive world for the franchise? Let all of those thoughts out down in the comments and then discuss. For more on Call Of Duty: WWII and all of these other items brought up, make sure to check in often as we will keep them all coming. Do not left be out of "the know."