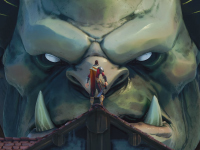 New gameplay for Extinction is finally here and it is showing off just how much work that Iron Galaxy has put into the game since it was first shown off and then demoed for the masses out there. Spoiler alert, it looks like they have taken huge strides to make the game look and flow even better than it did before. Not that Extinction had issues before, but you can completely see all of the upgrades that have come in here and for us to look at now. Now if only we could get a solid date out of Maximum Games on when we can expect the game to hit the PS4, Xbox One, and PC in Q1 of 2018. That is such a broad time to look at for now.

In addition to the new gameplay for Extinction, we also get a nice look at some of the other Ravenii we will need to bring down in the game. These would be the giant Ogres we have seen in the game so far and before now only really came in one "flavor." Now it looks like there will be many others that have all kinds of other types of armor we will need to remove before moving on to decapitate or slice some limbs. The excitement for Extinction is back to high levels now and I cannot wait to get more for it soon.

For now, have a look at the latest gameplay trailer for Extinction and see if it has started to tickle your fancy for it. As I said, this gameplay looks even smoother than what we had to see at E3 and it looks like it could be a solid action-adventure game to kick the next year off with. Enjoy.

Avil is the last-remaining Sentinel and only he has the power to save humankind. Iron Galaxy presents a brand-new gameplay trailer for their upcoming action-adventure game – Extinction.

Extinction places emphasis on high-speed traversal around an interactive environment. Avil must move quickly – traversing across rooftops, alongside buildings, atop man-made structures and more – to save humanity from the encroaching horde, and take down the seemingly endless waves of Ravenii using his powers as a trained Sentinel. And while the swarm of smaller minions may seem like the crisis at hand, there’s always a larger problem on the horizon.

Armies of ogres are equipped with their own weapons and armor, requiring Avil to use tactical thinking, the structure of the environment, and even the enemies themselves in order to quickly eliminate the giants before they destroy all that’s left of the world and drive it to extinction.

It will take more than raw power to defeat these monstrous foes. Avil needs to use strategy, cunning and quick thinking to permanently take down ogres covered in layers of bone, iron, spikes, thorns, and dark steel.

Avil fights these giants in real-time combat, but there’s only one way to stop them permanently – decapitation. However, a Ravenii decked out in spiked armor isn’t going to be easy to take-down: his armor will injure Avil if he comes in contact with it. Therefore, he must lure a spiked Ravenii into smashing the ground, cracking his own armor until it breaks away. Only then can Avil sever a limb, vertically run up the monster’s torso, and make the finishing blow using a Sentinel’s most valuable skill: a powerful rune strike.

What do you think about Extinction now that you have had a chance to see a bit more for it? Do you think it looks better than what was going around at E3 or is it where you remember it being? Do you think we will have all sorts of Ravenii to fight in the game or will they just be "reskinned" characters to give the illusion of different beasts? Let us know all those thoughts down in the comments and then feel free to discuss. For more on Extinction as it comes, be sure to stick around here on the site. We will have more in the coming days/weeks/months and you will want to see it all.