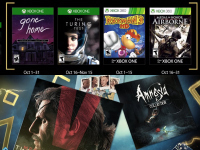 A new month is almost on us here with October and that means new video games that we are going to get for free. Well video games that you will get for free if you are part of the PlayStation Plus or Xbox Gold services. If you are then you may be in for a treat as the list of titles going live starting next month is here and we have it for you. Again, we get to expand out titles on the Xbox One and PS4 without needing to make any extra spends at our local stores.

This has to be an "all over the place" kind of list of video games here; especially for October. One would think that we may have been seeing a few more titles on the horror side of things given the month, but so far it looks like Amnesia is the closest we will have here. Not to discount Gone Home and Metal Gear Solid V as they are both amazing video games and deserve a good play, but it would have been nice to get more into the spirit of the month with some extra horror. I will not knock it though as these are all free and will give us some solid breaks in between all of the other titles coming out in the coming months.

Here is the list of games we will all get for our PlayStation systems starting on October 3rd of 2017.

Here is the list of games we will all get for our Xbox systems starting on October 1st of 2017.