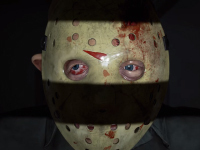 It looks like Friday The 13th: The Game will be getting another new Jason skin, Weather Effects, and another location from Friday The 13th's universe

There looks to be yet another version of Jason coming to Friday The 13th: The Game as the team over at IllFonic has now shown a small glimpse of the version from the fourth film that is out there. Not only that, but it also looks like we are going to be getting another map to run around and survive, or kill, on. Then to top it off even more, it looks like Gun Media has also let loose that we are going to be getting a new weather effect to add to the overall feel of Friday The 13th: The Game. All hopefully in time for the physical release of the game when it hits the PS4 and Xbox One on October 13th. Not too shabby…

Sadly, this is really all of the information we have here for these additions to Friday The 13th, as this was all that was revealed for it via the new trailer and the social media accounts for the game. You can see said video just below where you will get a very small look, but still a look nonetheless. It does show that the team is still dedicated to the game even with the rocky original digital release. Not that there was any doubt on that in the first place, but hopefully we will see the full Friday The 13th universe get fleshed out here as we press onward. Have a look for yourself.

Of course, this announcement is also coming on the tails of the list of updates that have been listed that are always coming to make sure that Friday The 13th: The Game keeps running and is fixing any of the issues that slipped through the first time around. There is another major patch that should be coming soon that will also fix a lot of the current issues people are having with the game, so keep an eye out for that. Mix that in the with the constant content updates that we are seeing from IllFonic and Friday The 13th: The Game will soon be where I am guessing the team originally wanted it to be before the earlier launch. That is of course as we also wait for the single player mode that is also still to come.

Are you glad to see that another batch of new content will be heading to Friday The 13th: The Game or did you give up on the game already? What do you think will make this version of Jason special, as this is not going to be just a skin for another one that is already in there? Do you think that the new rain effects will make some of the matches feel new or will it just be something else in the background you won't full notice as you are running for your life? Let everyone know what you are thinking down in the comments and then discuss. For more on Friday The 13th: The Game as the game is updated, be sure to stay right here. We will have the coverage and you will want to read it all.