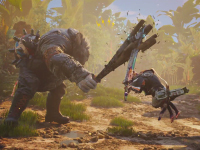 Back at Gamescom we had our first look at Biomutant and were left to speculate on all of the ins and outs of the game as it was really just a cinematic trailer with an announcement that the game was in the works. Now we jump to the most recent PAX, and now we have some new gameplay foot age for the game so we can see what Experiment 101 is really up to with the game. Or at least get a good look and feel for what could be coming with Biomutant and if it truly fits into the list of titles that THQ Nordic is known to bring us as of late. Also, I guess, to get us all hyped up for the game to hit the PS4, Xbox One, and PC in 2018, but that is a side thing. Or the main thing. Take it as you will.

In the following gameplay for Biomutant you will be seeing what looks to be the first twenty minutes of the game or so. Seeing as it is still in development, things could change, but it looks pretty final to me. At least in terms of how it will function and progress. I say this in case you want to skip spoilers of any kind, but seeing as Biomutant will have branching paths, you could really just go down the other one to get a "new" feel for it all. Anyways, have a look and do enjoy.

We got to play Biomutant at PAX West 2017 and managed to get some time with everything from character creation to questing and combat as well!

I will start off by saying that I really like the character customization in Biomutant and how it is all presented here. The UI says what it is but the narration tells you what it is in game. From there though, it really feels like it is another game. Something a little more… I don't know… Darksiders-like. We are running through a wasteland of a world with a melee and gun combination all while utilizing a "free-flow" style of combat that still comes back to the guns being the weapon to use. Add in a horse and a fast dodge there and we pretty much have the same game with a different narrative and art style. That is of course the base perception.

Do not take any of that to mean bad things for Biomutant or that I am not impressed with what we have. I know I loved every minute of the Darksiders franchise so far, but it does feel a little too close to be its called its own thing completely. I know we cannot say that about any video game really, but it is how Biomutant looks to me at this point. This could also only be the way Experiment 101 has started it all off and things could change along the way. Nonetheless, this is how it all feels to me at this time and I will not say otherwise. At least until I get to go hands on with it myself. That is usually the big decider anyways.

What do you think of the gameplay for Biomutant that we have here? Do you agree that it looks a lot like other titles in the THQ Nordic realm or am I being swayed by things I should not be? What are your thoughts on the visuals and character creation system? Let everyone know your thoughts down in the comments and then discuss. I know we will have more for Biomutant as we head off toward 2018 so be sure to check in often. There is still so much ground to cover and we will take you all along for the journey on the site.