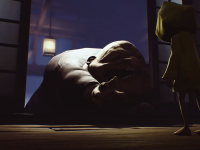 Earlier this year we were all treated to a nice little game called Little Nightmares. Well, at least you had the chance to treat yourself to the game if it looked to fit into your particular interests. It was a dark adventure game from Tarsier Studios that caught a lot of great attention and fared rather well among all of the critics out there back in April. It looks like Little Nightmares fared so well that now on October 27th Bandai Namco is bringing the game back to the PS4, Xbox One, and PC in a new form with the Complete Edition of the game. Look at that, a new way to experience the game if you did not pick it up digital or physically just yet.

Little Nightmares' Complete Edition will be a new physical version of the game for those who want to have a different option to purchase it now, and it will also house a Season Pass code so you can download all of the little extras that are currently out there and still waiting to get released. There are supposed to be three major adventures that will expand on the current game and only one of them is out right now. There is no timeline for the other two, but now you can pick up the new bundle and make sure that you are primed and ready to go for when the rest do finally land. Awesome.

Little Nightmares presents a grim shadowed-filled adventure through an interactive storyline, outstanding sound design, and a unique art-style that is sure to deliver eerie chills and goosebumps. Players will control Six, a young yellow raincoat clad girl who finds herself in the bowels of The Maw – a mysterious vessel inhabited by corrupted souls looking for their next meal.

Little Nightmares Complete Edition arrives on PlayStation 4 and Xbox One on October 27th, 2017. This physical package will contain the full Little Nightmares adventure and a download voucher for the Little Nightmares season pass which includes three adventures that will take players deeper into the mysteries hinted at throughout the game.

This release announcement does seem a bit odd to me given how long ago Little Nightmares did release. It has only been a few months and we had all of these options from before, they were just separated out. If memory serves at least. More or less, it seems that Tarsier Studios most likely meant to have this creepy little title to have released around Halloween originally but needed to get it out to fulfill publisher wants. Now they are getting the best of both world as Little Nightmares has been reviewed rather well for the last few months and now will get a resurgence with the second release. At least I am thinking that is the goal here. Especially since the game is currently selling for a reduced price on all of the major outlets currently.

Have you had a chance to play Little Nightmares yet or will this be the better prompt to go out and pick it up? Does the inclusion of all the DLC make the sell better to you or will it be a way to just bundle it all and sell at a slightly higher cost now? Do you think that October was the originally planned date or is this just a way for the publisher to cash in further on the pretty good reviews the game has had since launch? Let everyone know your thoughts on this down in the comments and then feel free to discuss. If there is more for Little Nightmares or any of its DLC, we will have it here. Stick around on the site to make sure that you see and hear it all.