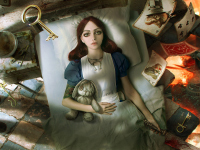 Another title in the famed Alice franchise could be on its way as the tentatively title Alice: Asylum is getting a proposal together for the publisher

Fans of the Alice franchise can start to get ready for a celebration, as it has been announced that there is work starting on a third installment for the franchise. Well, more of a proposal to start work on the third installment and designer American McGee has come out to tell us that there is now a proposal in the works to be sent off to EA in hopes to be able to make the third game. A game that is tentatively titles Alice: Asylum at this point. So it could change depending on how all of that goes or if it does not fit the overall feel of the game if it is approved and then developed. More or less, it looks like there is just serious intent to work on the third title for the franchise and nothing concrete at this time.

More or less, this Alice title is nothing more than an idea that is going to be written down with a few bits of artwork to try to sell the idea to the current IP holder so we might want to hold off on the celebrating for now. Given that Alice: Madness Returns did not do as well as hoped, it could be a hard sale. I am not saying that there is not a fan-base out there begging for a new title in the franchise, myself included, it just does not seem the current focus of EA at this point. At the very least, we may see a few cool bits of concept art flow out and a great story idea, and at the best, we will have to wait a few years for Alice: Asylum to be made. Maybe longer as the teams that brought us all of the franchise to date have been shut down and a new one would need to form to bring this idea to light.

This is all that is currently known for Alice: Asylum at this point, but the franchise is not dead yet. Given the success of McGee's recent Kickstarter game, things could be in favor there. We will have to wait and see. Or try to strong arm EA into giving the game the green light as the blog post that started it all seems to be calling for it. You can see all of that just below and then see if you can help get things going here. Let us all hope that it does.

September 2017 — Fresh off the success of “Out Of The Woods” on Kickstarter American McGee will start work on a proposal for the next chapter in Alice’s adventures, tentatively titled “Alice: Asylum.” This proposal will include artwork, design outline, and financial/business model. When this proposal is finished (and assuming all the numbers and constraints make sense) it’ll be sent to EA. You can show your support for this effort by signing up to the mailing list.

Where are your current hopes that Alice: Asylum will actually get the "go ahead" to be developed? Did you enjoy the last title enough to be part of the "cult following" of the franchise or have you never played a single title in the franchise? Given where everything was left off, where do you think the franchise and story will go if there is an approval and funds set up for it? Let us know down in the comments and then discuss. We will be keeping a close eye on this Alice: Asylum and bring you all of the updates and news for it as it comes. Hopefully a lot more on the positive side than the negative. Just keep checking in here to make sure you know it all.