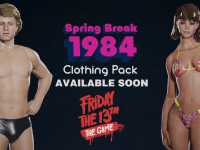 If you have been enjoying Friday The 13th: The Game up to now and have been hoping for more ways to deck out your counselors, then look out as Spring Break is going to be hitting the game soon with some new DLC outfits to pick up. Yes, you read that correctly. IllFonic and Gun Media are bring us all some new costumes to put on during the match that will place us in an even stickier situation when Jason comes around. You know, because this is something that we all need when playing matches in Friday The 13th. I am sure that there are some of you out there looking for that, so get ready to add these all to your list sometime soon as the release date for the DLC has yet to be set for the PS4, Xbox One, or PC versions of the game. I am going to guess October 13th, but that is not official.

The finer details for this new DLC for Friday The 13th haven't been placed out there just yet, but it looks like it will set you back $3.99 USD when it does come but for a limited time it will be available for $1.99. Again, those times are not set as of yet. Nonetheless, this DLC will bring new swimsuit or "Spring Break" options of clothing to put on your counselor. You can see some of them in action just below, but it is as cheesy as you can assume here for Friday The 13th and of course places a bigger target on you in the match with all the bright colors. You would think that you would not want to wear any of this when hiding from Jason in the woods, but it is what it is. Maybe they will give some form of bonus to stats, but the only one that would make sense is Swimming and a decrease in run speed due to the terrain and what most of them are wearing.

Friday The 13th: The Game is getting ready for Spring Break! New DLC clothing will come to Camp Crystal Lake for all counselors on Xbox One, PS4 and PC!

I will say that is kind of an odd little bundle to bring for Friday The 13th: The Game here. It looks all cosmetic and something that will be used for a laugh or two and then be removed forever. Especially when you compare it all to what you can get for Jason even when it comes to skins for the character. Retro Jason is my main here. I am going to guess this is a way to breathe new life into the game as it has been out digitally since May and will be getting a second chance as it releases physically on October 13th. I know I would be more tempted to pick up the exclusive DLCs that have already released to bring me back into the fold 100%, but this is what it is. Maybe we will see a surprise here with these new outfits for Friday The 13th: The Game and see that they add some great stats for how some people play.

What is your takeaway for the new DLC coming to Friday The 13th: The Game "soon?" Do you think it is a great addition to it all or do you think that IllFonic should focus more on other aspects and other DLC for the game than purely cosmetic? Could these give some great stats or will it keep the Non-Pay-To-Win model for a bit longer? Let us know down in the comments and then feel free to discuss. We are still enjoying Friday The 13th: The Game over here and look forward to hearing more. We will of course bring it all to you as we get in so be sure to stick close to the site here to make sure you see it all.