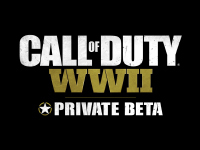 I am hoping that you are ready to kick some Nazi ass here soon as Call Of Duty: WWII is about to unleash its multiplayer beta on the PS4, Xbox One, and PC in just a short amount of time. While Sledgehammer Games has been hard at work making this another great entry into the franchise, they need help making sure it is a multiplayer experience you want and that Activision was able to secure a few more purchases by setting up a private beta as such for those who pre-ordered the game already. Pretty much in all other Call Of Duty fashion here and to give players a taste of what is to come. Also to make sure that the servers can handle the load that will be placed on it so the launch of it all goes super smooth and not filled with issues of servers fall or the game being unbalanced. So get ready for August 25th to land here soon.

This of course isn't going to be the full multiplayer experience for Call Of Duty: WWII as they need to keep some of it held back for launch in November, but it will include all of the aspects that are making it back here in this version of the game as well as two new ones that have been shown off in the past. These would be the Divisions and War Modes that have been shown off at conventions in the past but now you'll be able to give them all a go. Although the Divisions portion of Call Of Duty: WWII is more or less just here to replace the Create-A-Class system from before and just has you "enlisting" one of the five fighting groups to jump into the match with. They are all open and ready for your deployment when things kick off here in the short wait we now have.

The other big aspect of the Call Of Duty: WWII multiplayer that is being shown off though is the War Mode. Specifically the Operation Breakout as part of it all. From what can be seen here and explained, this is the operation that was shown off at E3 and other locations that pits us all in an Allies Vs. Axis fight to claim objectives and, secure locations, and then shoot the holy Hells out of each other. It was a nice little extra thing mixed in for my coverage for Call Of Duty back during E3 and felt like it added a nice alternative for gameplay to those who are not a fan of the constant Deathmatch style of play. I know I enjoyed it and am looking forward to it all coming to the beta here soon.

First, Divisions replaces the Pick 10 Create-a-Class system, and delivers the fantasy of enlisting in one of five iconic fighting groups in the world’s most brutal conflict. This test of the Private Multiplayer Beta will feature an introduction to a portion of the player’s soldier progression and the underlying foundation of Divisions, and we can’t wait to hear your thoughts on it. The final design of this new feature will continue to be fine-tuned as development continues from now through launch.

Also, we’re excited to hear from you after you’ve played Operation Breakout, our first War Mode experience. War, developed in partnership with our friends at Raven Software, is a new way to play Call Of Duty Multiplayer in an immersive Allied vs. Axis fight across the war-torn village of St. Lo, France.

Here’s an overview on what you should expect in the Private Multiplayer Beta:

Will you be taking part of the upcoming Call Of Duty: WWII multiplayer beta or will you be holding out for the full version of it all? Do you think that this will do more than just test out the servers and give a taste of the new game or will Sledgehammer Games be able to take all the feedback and make it a better experience for all? Are you excited to see what the new War Mode will be bringing or will it just feel like many other modes linked together at the end of the day? Let the world know what you are thinking about all of this down in the comments and then discuss. For more on Call Of Duty: WWII and all of the new modes coming with it, be sure to stick around here on the site. We will have more as we head toward the November launch and you won't want to miss a single thing.