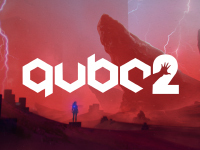 A sequel to the amazing Q.U.B.E. title has been announced and we can look to be back in the saddle with Q.U.B.E. 2 next year

It's been a long time coming, but Q.U.B.E. 2 has been announced and is in development to carry the whole IP along into the next generation. That sounds like a bad 80s slogan; I know. That doesn't change the fact that Toxic Games is working on a new title here and bringing us all more of the weird puzzle solving and death-defying gameplay that won many awards. All souped up with new technology as Q.U.B.E. 2 is heading for the PS4, Xbox One, PC, and Mac without needing to be remastered and updated to make it to all of the platforms over time. The first game took six years to hit everything here and bring more joy to gamers out there since 2011. Now it's only been seven years for a sequel as this game is slated for 2018 at this point.

Sadly, this is only an announcement for Q.U.B.E. 2 and there is very little to know about the game so far. Not that there is much to explain for it as the title of the game holds the core gameplay; Quick Understanding of Block Extrusion. We are moving things from one place to another to solve puzzles to survive on this mysterious alien planet with British archaeologist Amelia Cross and another "survivor" named Emma. Although the trailer here makes it all feel like we are playing the first Q.U.B.E. again only with everything being reset. At least it sounded that way to me but none of what is seen is something I remember from before. I guess we will all see here soon-ish as we head toward 2018.

Q.U.B.E. 2 puts players in the shoes of British archaeologist, Amelia Cross, on a beautiful yet mysterious alien planet. With the help of fellow survivor, Emma, Amelia must face the challenges of the Q.U.B.E. in the hope of finding a way back home. Q.U.B.E 2 retains the shifting, environmental puzzles of the original but wraps the action around Amelia’s own intimate story and her quest for survival.

“With Q.U.B.E 2 we want to give the player more story but we also want to give them more choice,” said Dan Da Rocha, Managing Director of Toxic Games. ”We’ve developed the tools players can use to solve puzzles, subverting the linearity of the original in favor of something more open, something that allows players to put their own stamp on solutions.”

Even though all of this was on the short side of things, I won't deny my excitement for Q.U.B.E. 2 getting made here. I learned about the original game a little later than I would have liked, but it quickly became a favorite of mine and I see how it earned all of those awards that it did get. It's also been a while since we had a good puzzle game like Q.U.B.E. or, in the same vein, Portal. Unless Toxic Games completely throws everything out and completely redesigned the IP, which we can see they haven't in the trailer there, I see this doing just as well if not better than they did before. I guess we will know for sure here in no time. At least I hope it feels like "no time" as I want to give the game a play right now and hate we have to wait.

Are you just as excited to see that Q.U.B.E. 2 is going to be a thing or have you missed out on the franchise since it first launched? Do you agree that it sounds like we are going back through it all again in the trailer but the text states we are going in a fresh way? Do you agree that it has been too long to have a game like this or is it a good break from all of the other titles we have thrown at us in the meantime? Let us know down in the comments and then feel free to discuss as you wish. For more on Q.U.B.E. 2 as we get it, be sure to stay here on the site as we will bring it all to you. Don't miss out on a single thing.