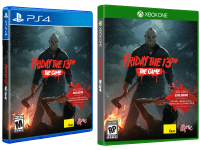 It looks like Friday The 13th: The Game will now be getting a physical release after great digital sales and this will all be on the next Friday The 13th

If you've been hoping for a physical version of Friday The 13th: The Game to come into your home here soon, then the wait is almost over. It looks like Gun Media and IllFonic are going to be hooking up those fans who held out, somehow, on not getting it digitally back in May and still want to have the gaming experience. At least on the PS4 and Xbox One version here as those are the platforms this new version of Friday The 13th will be coming out on. Now you just have to wait until October 13th before you can join in the fun that 1.8 million other gamers are already experiencing. Before you check, yes, this is a Friday and it is also the 13th. The proper date the game should release on.

This version of Friday The 13th will set you back $39.99 USD if you so choose to take the deep plunge then. It will also come along with a free pack of clothing for the playable cap counselors in the game and also a free Bloody Jason Skin for all versions of Jason in the game. If these skins and freebies will come to players who have been playing Friday The 13th: The Game since launch is not fully clear, but if you need to have it all then you may want to head out and pick up the physical version now. Or at least when it launches in a few months again to try and bring in even more players to the online experience.

Gun Media and IllFonic are happy to finally announce the launch of their Friday The 13th: The Game physical edition to Xbox One, PS4 and Steam this Friday the 13th in October for $39.99!

Included: Exclusive free Bloody Jason Skin for all playable Jasons and free pack of clothing for each of the playable camp counselors.

If you've been following along with Friday The 13th: The Game for a while now, you may still be concerned about some of the bigger issues players have been claiming online. It is worth noting at this point that there have been some great strides in improving the game in all of those aspects and the team over there is still working on it all so this version may have all of those fixes and the upcoming single-player mode added on disc as well. Not that those won't be coming to the digital versions of Friday The 13th, but at least you'll know that there was a huge sample of players out there trying to make the game the best thing by the time the physical version launches. I guess we will fully see then…

What do you think about Friday The 13th: The Game finally getting a physical version of the game out there? Do you think that it will only be a last ditch effort to grab some more players as the digital version will have been out for some time before then? Do you think that all of the extras will make it over for those who have been playing for some time or will they stay exclusive for those who pick up the physical version and stay only for them? Let us all know what you are thinking about this down in the comments and then feel free to discuss. For more on Friday The 13th as it comes though, be sure to stick around here as we will keep all of the updates flowing as we can.