Observer Gets Even More Cyberpunk As Rutger Hauer Hacks Those Nightmares
by David 'Hades' Becker [ Friday, 4th of August 2017 - 07:00 PM ] 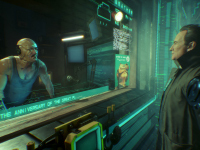 Cyberpunk seems to be making a huge resurgence lately and Observer looks to be one of the titles that is helping all of this along. At least if it is all done well and Bloober Team delivers again on their horror skills. That and the upcoming Blade Runner 2049 doesn't sour a lot of people. Seeing as Observer is now launching on August 15th for the PC, PS4, and Xbox One it seems more weight will be placed there now among a few other titles out there. Especially since a huge name from the prior IP will be leading us in the charge here in this new horror cyberpunk game. Maybe you've heard of him. Rutger Hauer has been announced to be in the game now.

Not only is he in the game, but he is the voice of Observer's protagonist, Detective Daniel Lazarski. A nice little change-up here for us all as we go through and hack the dreams and nightmares of the world to solve a few crimes and maybe thwart a few along the way. Most likely just get freaked out a bit more as Observer is still a horror title just in the fantastic world we are all going to be in. Maybe this is all just a nice set up for a new resurgence and such. Maybe it is just the team using the best tools out there to give us a great experience. You can ponder that over as you want as we all wait for the release date to come and allow us all to jump into the game here.

The year is 2084. If you somehow survived the Nanophage, odds are you were killed in the War. Those who live have turned to drugs, VR, neural implants — anything to distract themselves from this new reality. You are Daniel Lazarski, an elite neural detective known as an Observer, and part of a corporate-funded police unit whose purpose is to hack and invade suspects’ minds. In this future, anything you think, feel, or remember can be used against you in a court of law.

When you receive a mysterious message from your estranged son, a high-level engineer for the almighty Chiron Corporation, you journey to the Class C slums of Krakow to investigate. But as you hack into the unstable minds of criminals and victims to look for clues, you are forced relive their darkest fears. How far will you go to discover the truth?

Are you still siked up for Observer or is it a title you thought about skipping? Does the inclusion of Rutger Hauer make you more or less likely to give it all a try? Doesn't this all look a lot more like a Blade Runner title on the surface now or is it still all in its own unique world for you? Let everyone know, so they don't have to hack your brain, down in the comments and then discuss. As we get anything further for Observer, we will have it here. Keep checking into the site to be sure to be up to date on all of it as we are only a few weeks out now.