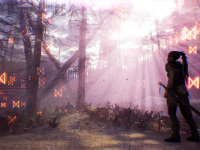 It has been announced that Hellblade: Senua’s Sacrifice will have a Photo Mode mixed in & we have some new Hellblade gameplay to spy on

It seems like Photo Mode is all the rage in a lot of the big titles nowadays and Hellblade: Senua’s Sacrifice is not going to be left out of all of that fun. It has just been announced that Ninja Theory has put this mode into the game as well but before you roll your eyes, I will say that this is one of the games out there that will truly benefit from it. Sure, Hellblade looks pretty and there will be some great facial captures and environmental shots you'll want to capture, but unlike the other games that have only that, I can see much more here. Especially when you count the fact that we will be "seeing" strange things that maybe the character does and doesn't see. Fun things that we would want to share out there in the world.

I don't normally use these kinds of modes in games, but given what we've seen so far for Hellblade I have a feeling I will be snatching so many out there. Just the few samples alone show off the diversity we will get to see and just how some of the filters and features will add to it all. All of which to take Hellblade: Senua’s Sacrifice to yet another amazing point in AAA title from an Indie-sized team. I know I am in awe of what I can see is possible even though these are all most likely done by the team who knows that they are doing and not the average gamer like you and me. Either way though…

Photo Mode will be available in Hellblade: Senua’s Sacrifice when the game launches on PlayStation 4 and PC on August 8th.

You can easily capture Senua in action and the breathtaking scenery of the Viking wildlands, like the images above which were taken using the in-game Photo Mode. We've included various filters and tools such as camera pan and roll, focal distance, colour grading, and more. In addition to the new mode for Hellblade: Senua’s Sacrifice, we also have some new gameplay for the game from Ninja Theory. More than we've had before as it has been very basic combat and walking around, but seeing as August 8th is quickly approaching, it is time we see a good chunk more. Also to see just how the nuances of Senua’s sanity will also play into it all as the voices do help her a bit while also distracting or doing harm in other instances. Particularly I like the fact that the indicator for an incoming attack from behind is her own mind telling her to watch out from behind. That is the most obvious on, but I am sure there are many more instances like this as Hellblade: Senua’s Sacrifice plays on.

Were you expecting Hellblade to get a Photo Mode given the size of the team or does this just seem standard now? Do you agree that there will be the opportunities for better images here than in other games given all of the visuals going on? What is your take on some of the combat we had here and do you think there will be many more things like we saw here where the voices help or hinder our progress? Let us know down in the comments and of course feel free to discuss it all. For more on Hellblade: Senua’s Sacrifice though, be sure to stick close to the site here. We'll keep it all flowing on out there as best we can all while trying to cover everything else. We take on too much sometimes.