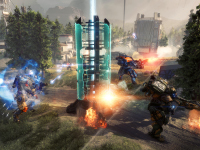 We've all been waiting patiently for the next big update for Titanfall 2 and it is just about to land on our PS4, Xbox One, or PC on July 25th. Not only has the wait been long, or at least seemingly so, but it looks like Respawn is going to be bringing a whole lot more to the game to keep the Million and more players out there happy. We also have our first look at the new updates for Titanfall 2 here as well so we can see the new PvE Horde mode in action as well as the two new maps that will be coming to the game when the update goes live. Not too long now and at least we have another big event going on to keep us all distracted until then.

You can have a look at the new Titanfall 2 updates just below. Also, while this update is free, there will be some paid items added in as well. Elite Warpaints for your weapons and Titans will be it but they will boost your XP you earn as well. If you are into paying for in-game XP and such. You will have until August 28th to pick those up though so you have a bit of time to see if you want to keep on with Titanfall 2 and shelling out more money to EA for it all.

In addition to all of that, if you still have yet to pick up Titanfall 2 and want to give it a try, you will have your chance as there will also be a planned Free Trial of the game for the PS4, Xbox One, and PC that will run from July 28th to the 30th. You'll only get to play The Beacon mission when it comes to the single player side of it all, but you will have full access to the entire Titanfall 2 multiplayer and that it has to offer. Just to throw that out there so the number of players can get a boost if you so wish to continue on afterwards…

Long sight lines and tight quarters dictate the battle in this abandoned desert reservoir. The towering, sheer walls and a system of convenient zip lines provide Pilots with means to get around quickly while Titans do battle in the long corridors below. Pilots can also set up ambushes in the guts of this complex pipeworks, while titans can lock down large sections of the battlefield at critical junctures. Tread carefully.

A new modular construction of a residential firefight. Cover is sparse for Pilots bold enough to leave the safety of a few houses. Windows and rooftops decide who controls the map, but dense interiors can always hold surprises.

Are you still playing Titanfall 2 and needed this new update and maps to carry on the fun? Will all of this bring you back to the game if you have already felt like you played it all before? Will the Free Trial be something that could bring you in or will you need more than a mission and multiplayer to make the full sell? Let us all know down in the comments and then feel free to discuss. More on Titanfall 2 is sure to come and we will have it all here for you. Keep yourself locked into the site to make sure you see and hear it all.