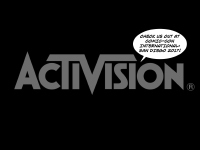 We are a week out from SDCC this year and as usual Activision is bringing a whole slew of things to show off with Call Of Duty: WWII and Destiny 2 being on the bill for this year's geekfeast. It makes perfect sense as they have done this almost every year for quite some time even when there are only small announcements and expansions for other games and then the buildup for their big money maker of the year. I guess that is why there is going to be a big announcement for Call Of Duty: WWII out there as the new Nazi Zombie mode is going to be the highlight of it all. Yes, we are going to be getting the first showing of the mode and how it has gone toward its horror theme this time around instead of just the mindless fun we know it as. At least that is how it is all being sold for now.

On top of the big Call Of Duty: WWII announcement and showing, they will have a different panel going over the changes of Destiny 2 and all of the aspects that have been worked on to bring us all the sequel to the game. There will also be a look at the Crash Bandicoot franchise given the most recent remaster and update. Mostly it will be going over the aspects that the teams had to rework and just how it has all progressed over the last few decades. Pretty much what you'd expect for it all as that game launched only a short time ago and so far nothing completely new has been announced as of yet. Unless that is one of the special announcements that are being teased here. Although I have a feeling that it will be a version of Crash showing up for some of the panel and that is about it.

Of course, to get into the panels out there, you will need one of the coveted and hard to get passed to SDCC. That is unless there is a yet to be announced off-site event for Call Of Duty: WWII as they have done in the past. That or you can watch it all streamed online so the only thing you will miss out on will be the cool posters and live experience of it all. Although I am sure that the new looks at the games and the new information on the latest Call Of Duty Zombies mode will be the bigger stars of it all. I guess we will find out here next week.

Crash Bandicoot Then and Now

Crash Bandicoot is back! One of the most iconic entertainment characters of the last 20 years, Crash is enhanced, entranced, and ready to dance at SDCC. This fan-focused panel celebrates the world-famous marsupial with a nostalgic look at the original games from the '90s and rich discussion of this year's Crash Bandicoot N. Sane Trilogy, the newly remastered game collection. Panelists from key companies like Vicarious Visions, Naughty Dog, and Dark Horse will share stories from then and now. Topics include the N. Sane Trilogy development process, including the art and character modeling that transformed the beloved classic game into a modern experience. There will also be exclusive giveaways, and a special surprise for fans!

Call Of Duty is returning to Comic-Con with a new, dark chapter in Call Of Duty's fan-favorite zombies co-operative mode. Get the first look at this new zombies horror experience from the team at Sledgehammer Games, as they bring their rich horror pedigree to zombies! Be the first to see the popular zombies mode in all its glory, and meet members of the zombies dev team and some of the Hollywood cast of actors who will be surviving this year's zombies horror. Attendees will receive a limited-edition Call Of Duty: WWII Nazi Zombies poster!

Destiny developer Bungie presents an inside look at how game design, writing, acting, and cinematics all work in concert to tell the story of what happens when superheroes lose their powers and their home in Destiny 2. Panelists include Luke Smith (game director), Matt Ward (cinematic lead), Guillaume Colomb (narrative design lead), Gavin Irby (design lead), and Jason Harris (senior narrative lead). This panel is brought to you by Mattel.

Did you just get a few more panels added to the list for SDCC or will you be watching all of the new Call Of Duty: WWII footage from how/work? Do you think that they will hit the nail on the head for the horror side of it all or will it be another mindless shooting gallery? Do you think we may get a new Crash Bandicoot title announced here or will it be a cheesy thing for the hardcore fans? Let us and the world know down in the comments and then discuss. For more on Call Of Duty: WWII, Destiny 2, and the future of Crash Bandicoot be sure to stick right here. We'll have it all for you and you won't want to miss out on a single bit of it all.