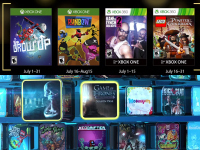 A new month is almost on us here with July and that means new video games that we are going to get for free. Well video games that you will get for free if you are part of the PlayStation Plus or Xbox Gold services. If you are then you may be in for a treat as the list of titles going live starting next month is here and we have it for you. Again we get to expand out titles on the Xbox One and PS4 without needing to make any extra spends at our local stores.

Here we go with another amazing spread of video games to keep us all inside during all of the heat out there that is melting things. If I wanted to sweat like that I'll keep to Kane & Lynch 2 and their musty look and feel. Or given that Until Dawn is all in a winter non-wonderland, we could pretend to be there and try replaying the story over and over when not getting excited for Game Of Thrones with the Telltale game here and then the new season of the show to give us a break from all these fun video games. Either way, a very solid month for both sets of systems to make those extra payments well worth it.

Here is the list of games we will all get for our PlayStation systems starting on July 4th of 2017.

Here is the list of games we will all get for our Xbox systems starting on July 1st of 2017.