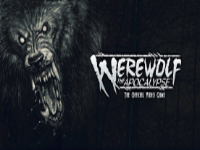 Not all games that I was excited to learn more about at E3 were up and running on the show floor and Werewolf: The Apocalypse was one of them. Any gamer and fan of the franchise would have been excited to see what Cyanide Studio had for the game since it was only announced earlier this year and nothing else had been brought up about it. While Focus Home Interactive was featuring Werewolf: The Apocalypse at E3, there wasn't anything in terms of gameplay and the like out there, but that didn't mean we came up completely dry. We had a chance to sit down with Julien Desourteaux, one of the directors for the project, and pick his brain for anything we could for the game. Here's some of what we could get.

For those who are not familiar with Werewolf: The Apocalypse's roots, I will direct you to the World Of Darkness table top and live action role playing games to start off with. There is way too much to go into here as there have been multiple revisions to the overall universe and the direct system for the franchise over the last 20 years. I'll leave that up to you to get into the nitty gritty, or if you are like me you won't need to. None the less, the video game version of Werewolf: The Apocalypse will be working in the realm of the latest 20th Anniversary Edition rules for some of the in-game mechanics and lore.

Now that we know where Cyanide Studio is starting from, we can move right along into what else is known for Werewolf: The Apocalypse. Given that they are still in very early development, there is still no final script as of this interview, things will be a bit sparse here. I was able to get out of Julien, that while there will be tribes in the game, we will be taking on the role of Ronin and not directly linked to any one of them. The story will be a linear one with the illusion of choice, but the story will still go in the same direction no matter what is said and done. So don't look to be able to join any of the various ones out there to change things up besides the gifts you'll have at your disposal in the game. Werewolf: The Apocalypse will also be taking us down the Eco-Terrorist path of story from the core book's design. There are a few other types of stories that can be told in the genre, but this is the way that the team is going and it sounds like it could be a very fun game. Especially when one of the main antagonists to be dealt with is the Pentex Corporation. For those not in the know, this is a company secretly ruled by other supernaturals bent and represents many industries out to harvest various natural resources for human progress but the destruction of nature itself. That is more or less a watered down version of it all as there is so much more to it all.

Story and world aside, Werewolf: The Apocalypse will also be all about the Rage. One of the tag lines that Focus Home Interactive had all over was "When will you rage?" after all. In game this will be represented by a meter that will fill up or deplete based on actions and combat in the game. Most would think it is linked only to combat, but here in Werewolf: The Apocalypse it will be linked to everything including basic dialog as you can hit the tipping point and go into a full on Frenzy and eviscerate friend and foe blindly. From the sounds of it, unlike in the pen and paper versions, you won't lose control of the character, but something will happen to make it so you can't tell the difference and need to kill everything.

Of course when you do Rage or Frenzy you will also go into the full werewolf mode as the Crinos form is one of the forms you'll be able to take in Werewolf: The Apocalypse. There is also the Homid form, or basic human, as well as the Lupus form, or wolf form. In the books there are two other forms that can be taken, but as of right now it was explained that these would be the limit as they would each have their own purpose to drive the gameplay and the story along. Human form obviously to do all of the stuff that would require a basic human form to do and not stand out in public. The Lupus form being used to traverse the world and blend in as well given the mountain area that the game will take place in.

Don't think this will all be forest and mountain ranges for Werewolf: The Apocalypse though. The concept I was shown for the world layout hand a blending from full wilderness to full cityscape as part of the scope of it all. Just as in the real world and World Of Darkness setting. It will be lush and filled just as any storyteller of the game would have it, and while Julien never said anything directly, Werewolf: The Apocalypse could also have call backs or, given the inclusion of Pentex, other supernatural creatures to deal with and worry about. It is a who world even though this is a Werewolf game and the team is fully aware of all of that.

I won't lie and say I wasn't hoping for more for Werewolf: The Apocalypse out here though. I would have loved to see some very pre-alpha gameplay or the like, but I completely understand where Cyanide Studio is with it at the moment. When you mix in the fact that the team knows the lore and have mostly been fans since White Wolf first brought it all out, we can sit well knowing it is in the right hands. I tested their knowledge while trying to reach for more details on Werewolf: The Apocalypse and this team is the real deal. Now I just hope we don't have to wait too long to get their story to experience in the not too distant future.

Anon Commenter [ Wednesday, 7th of February 2018 - 10:12 PM ]
As a video game it might lose or shoehorn you into paths, while storytellers can do the same thing what we found most enjoyable in tabletop rpg was that the story could literally go anywhere. I am curious to see how they handle gifts since tribe selection often led your gift choices though caring about the character will only be limited to pixels. Its a shame this game took so long to happen but I will try and keep an open mind, yes the garou have 13 tribes...not clans. The garou/kindred struggle was legendary next to the horde of supernaturals the white wolf game could conjure up. Pentex is but a mere facet of things in the world of darkness

Anon Commenter [ Sunday, 30th of July 2017 - 11:21 PM ]
The old version of the tabletop game is still alive and kicking in some corners of the internet. One of those places, which has been alive for about 20+ years now, is the text-base multi-player game, GarouMush (www.garoumush.org). Though its primary focus is on roleplaying as opposed to hack-n-slash. Definitely looking forward to seeing a more action-oriented video game interpretation of the old pen-and-paper version, though.

Anon Commenter [ Thursday, 13th of July 2017 - 01:18 PM ]
Played VtM:Bloodlines, loved it. Ecstatic to see White Wolf finally got their game back together after that whole World of Darkness MMORPG fiasco. A pity you can only choose one tribe though- I won't pretend I'm familiar with the Werewolf: The Apocalypse universe and game rules, but I do know I loved having different clans to choose from. Overall, I'm going to love getting into the more when it comes out.
Go ahead and login or register