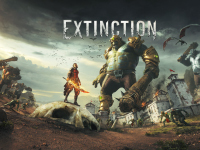 While at E3 2017 I was able to see Extinction in a more intimate setting than just a trailer. Here's my take on Extinction From E3.

Extinction was a title before E3 that had a pretty quick announcement and then turnaround to show off a bit more of the game. This would be the action-adventure, giant ogre killing title that we saw at the beginning of June from Iron Galaxy. You know the one hopefully. If not, don't worry as we were able to check out Extinction out at E3 so we could get a bit more familiar with this title before it hits the PS4, Xbox One, and PC sometime in the near future. Or near-ish future as it is still in a pre-alpha stage and this was what was shown off out there and ready for consumption at this point.

In Extinction we take on the role of Avil, the last soldier/sentinel who has been tasked with keeping humanity safe from the Ravenii and their minions. The Ravenii being the name given the race of 150-foot-tall ogres that have gone all genocidal on the human race. All for reasons that…well…haven't been presented yet, but I'm going to guess it is along the lines of being tasty or the same reason humans go after ants and other small insects. They are just a pest that needs to be cleared. Of course, that is all speculation on my end so don't think that is the case; it just wasn't something that Maximum Games has gone into detail on yet.

Anyways, a good portion of the demo that was shown at E3 can be seen just below with a bit of the description of what is going on in Extinction. It is a smaller slice that I was shown, but it is a good starting place to get the ball rolling and get somewhat up to speed to where I'll be discussing things shortly. Have a look and then we'll dig into the little bits that were left out or questions that Iron Galaxy has yet to answer for Extinction here as well. Enjoy.

As we see here in Extinction, there are a lot of ways to traverse the environment in ways that are like a super version of parkour. We can run up and along building and use our grappling hook to get around. Given that there were multiple attacks going on in the map at the time where we needed to save small groups of humans at a time, this is a great way to do it all. That way we can make it from one side of the map, extract some humans, and then get back to the other side to do it all again. All before the massive Ravenii show up and cause all kinds of other issues. Just as they were designed to do in the first place.

This seems like the main focus for Extinction and the other aspects just being something to do while we wait for the larger beast. As you hopefully saw, this is where the game makes a shift over to a Shadow Of Colossus meets Bayonetta style of game as we need to bring them down quickly by disabling their gear and then making an exaggerated sword swipe to sever limbs and then the head. Although, even though it wasn't mentioned here for Extinction, it is possible to skip all of the limb slicing and move directly to the head. It will just be a bit hard to get to and the ogre will be able to swat and attack if it has its arms still. Not to mention all of the minions that will keep it alive.

It is mentioned here in the video too that the world of Extinction is destructible. It is only shown very slightly here, but during my demo I was able to see that the Ravenii can and will walk through everything and there are some "win conditions" that require you to not only save the humans and kill the Ravenii, but also keep certain or all buildings completely intact to succeed. So in some instances it may be better to rush out and take them on quickly instead of letting them come to you while taking down the minions. Of course, all of this is shown before the action starts so you aren't coming into it all blind and failing for unknown reasons.

Another thing that wasn't mentioned here is that Extinction will have a few other modes of play besides the story and such. There is what is being called and Extinction Mode where Avil will be placed in a location and need to handle wave after wave of minions and Ravenii to succeed. More or less like the full game, but the only mission is to survive the onslaught and then keep going. All to gain even more XP to level up the multiple skills that you will have in your skill tree. Something that Maximum Games didn't go into detail with here as well. Just know that it is all there and we'll hopefully see it here soon.

I was excited for Extinction before E3 and this showing made me even more excited. The announcement trailer earlier in the month made it look interesting even though it was all cinematic but the gameplay looks like it truly is a blending of those two titles I mentioned before. The best of both of those worlds and even at the pre-alpha stage Extinction looked completely playable. After the minor glitches, issues, and world is built out further, this will be the game that you will want to lose umpteen hours to as it is just a fun and engaging title that will keep you wanting to kill more ogres.