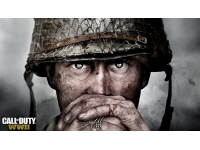 As with every year, one of the big titles on the show floor is in the Call Of Duty and given that they are "going back to their roots" it makes sense that WWII would also be making a huge showing this year at E3. Especially since last year Activision skipped the big show and only gave a little taste of things out the fans and press. Now that Sledgehammer Games has put a lot of time and effort into Call Of Duty: WWII it makes sense that we'd get the usual flair of it all at E3 as well as a taste of the multiplayer experience that will be hitting the PS4, Xbox One, and PC on November 3rd this year.

Just like every other Call Of Duty multiplayer experience, we were met with the mission briefing for the mode, in this case War Mode, and then left to select between our load-outs and character classes to play with. This was for the show floor here as we were set up with two different loads for each class of the Infantry (run and gun), Airborne (paratrooper), Armored (heavy weapons), Mountain (sniper), and Expeditionary (close range high damage) classes. Those descriptions really are the best based on what I was able to experience here for Call Of Duty: WWII and the five on five matches I was able to play during the events.

My side all started off of the side of the Germans on the new map for Call Of Duty: WWII and it was filled with trenches, bunkers, and farm houses to try and take down the other team in what was really a Team Deathmatch mode more than anything. It was presented as the mission, objective based, War Mode you can see above, but there never was much in the way of objective and just a lot of killing. It was pretty much what Call Of Duty has been for me in multiplayer mode for years now and nothing too spectacular. It could also be that we were the "bad guys" in this instance and point of time in history.

Once that game was completed we moved right along into the mode that was expected for Call Of Duty: WWII. I was still on the side of the Germans, and was tasked with stopping the allies from making their way through the missions and objectives laid out for this War Mode, and this is where I took to trying out each class to see what suited my play style. It was most likely where everyone else on my side did the same as the first objective was quickly taken and we were all still running around like headless chickens trying to get some kind of semblance. This was not boding well for Call Of Duty: WWII in my eyes as it was the same old multiplayer.

After most of us figured out that the Expeditionary class was almost pointless with the closed range, we all fell into what we found was right and then it all played out as a Call Of Duty match for us with a rather decent team. I swapped between Infantry and Armored mostly at this point as they fit my usual style and none of the others offered up any good perks to keep trying them. At least if we wanted to get through and see just what the War Mode had to offer us all. Sadly, yes, this means that the multiplayer for Call Of Duty: WWII as of my experience didn't have much to offer in way of anything new for gameplay mechanics and was really just maps and settings.

I also think that this was the reason I never was able to see the new "healing" mechanic in Call Of Duty: WWII as well. Sledgehammer Games has removed out the regeneration system that has been all of the IP for the last multiple titles and have brought in the need to heal yourself just as other titles in the same vein have over the years. The blood splatter UI is still there and it animates in the same way, but it doesn't do much more that add another level of confusion to me given how Activision has trained our brains over the years. This is probably why a lot of us kept dying over and over as we expected to be at full health again and were not paying attention to the health bar in the lower left.

What was nice to have in here for Call Of Duty: WWII was the tools and options to rebuild things in the match to help out. While on the German side I was constantly building up turrets to gun down the enemies over and over. When the sides swapped though, things were still the same, but I found that there were also more options to rebuild broken walls and barricades to slow and hinder the enemies while they tried to stop our assault and defense. This could have just been my progression in the match though as it seemed like the more we played Call Of Duty: WWII the more we saw all the little things to help us out. I guess it's good to have a learning curve again when not just going Team Deathmatch.

I am still not a huge fan of the multiplayer in Call Of Duty based on what I did get to play out here for WWII. Sure, in the nice setting of having the 10 players sitting next to each other it was nice, but we all know that isn't how this is going to play out when the game comes to market. It is going to be the same insanity that we know now. I will say that I am still excited for Call Of Duty: WWII based on the way it looked and possibilities to be had in the campaign mode and Zombies Mode. I wish we would have had a chance to experience that at E3, but that of course is not what draws in the crowds that Activision wants and needs.