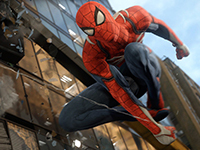 While at E3 I was able to see Spider-Man in a more intimate setting than just a trailer. Here's my take on Spider-Man.

This was one of the bigger titles that had everyone on the E3 showfloor clamouring for more and that is about what we had for Spider-Man out here this year. It of course all kicked off with the new gameplay trailer for the game that Insomniac Games put together for the big PlayStation showcase, but then was followed up with another showing on the show floor in one of the PS4 showrooms. It wasn't any different part of Spider-Man, but it was a live demo of the same portion of the game where a few different things were shown off and explained a bit more than in the trailer we all have most likely seen a few times over already.

Just like the Days Gone demo, I've added in the original gameplay trailer for Spider-Man that was shown and then will dive into the differences that were shown and explained behind the closed doors of the showroom. Sadly though, unlike the other title there wasn't much of a change outside of a few things playing out a bit differently. This is a Spider-Man game though and not one with a lot of choices as the other title is though.

The biggest difference that popped up in Spider-Man here was the fact that environment is a lot more interactive than was shown in the initial trailer. There was a lot going on before but if you look closely you see the L1 prompt show up a whole lot and they aren't used. They can be and they add in a whole lot more to the combat not only in use, but also in some great over-the-top scenes that make this even more of a Spider-Man title in my book. Of course some of it looked like it would kill the enemies as a hundred pound electrical box to the head would do that, but we'll ignore that for "comics" and such. Just as we do for Batman all the time.

Speaking of, Spider-Man looks to have a fighting system that is very remeniscant of the Akrham titles just with the Spider-Man flare to it all. It all had a free-flow to it all and it looked real easy to move from hitting one enemy to hitting another while dodging an attack from many others. Since none of it was in my hands, this is all based on assumptions from what was shown off, but that was the feel of it all. If that is indeed what Insomniac Games did for the combat then I think we are all in for a treat with this Spider-Man title as the combat has been less than impressive in a lot of the past titles.

While I know I didn't get to see much more for Spider-Man while out here, that has not lowered the hype level for the game in any way for me. I wish we didn't have to wait until 2018 to get our hands on it, but it looks like it is in great hands so far. Especially if you look at the little tease at the end of the the trailers where they throw in Miles. Speculation has already begin that this is more than just an Easter Egg and that this was him moving about the crowd after doing all the amazing feats we just saw. It could be. Then again it could be nothing. We'll just have to wait and see when we finally get more for Spider-Man.