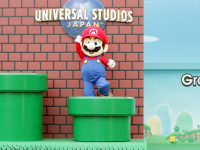 While a lot of big gaming news will be coming out for Nintendo here in only a few days, it looks like there is another massive bit coming outside of E3 and the major conventions. Maybe you'll remember back to last year when Universal Parks made mention that they were building a video game themed area in three of their major locations starting with Japan. You may also remember that it was also revealed that it would be specifically Super Nintendo World that was going to be built and that nothing had moved forward since then. If you remember all of that, then you'll be happy to know that construction has officially begun on said park and now we just need to sit and wait. That and plan a trip to Japan if you are outside of that location.

Yes, the ground breaking and start of construction for the Super Nintendo World has started and a huge event was held to kick things off. More or less it was a very themed, as expected, ground breaking ceremony that had all the classic looks and feels of Super Mario even though this is not going to be the only IP used for the attraction. While details are not much more than a few rides, themed shops and restaurants, and something based on Mario Kart, we do have a new teaser for it all that may shed a little more light on all of this and what we can expect there and them most likely in the Hollywood and Orlando locations in the States.

Yes, the teaser here for Super Nintendo World still looks to be all Mario flavored for the most part, but what is interesting is the focus they gave on King Koopa's Castle. Could this be some kind of "horror" location in the attraction? Maybe. It could be nothing more than a one-stop shop for all the cool things from Mario-past. More or less it could just be here to remind us that Super Nintendo World should also have Metroid, Zelda, and Donkey Kong things mixed in but they may not be out there in the Japanese location. Maybe that is just me reading into it a bit, or maybe not. All we know now is that the ground is broken, construction has started, and the time table to get it State-side has now started to tick. Maybe there will be more on all of this at E3 too.

What do you think about Super Nintendo World starting up and going into full construction here? Do you think that the version in Japan will be more focused on Mario than the others or is that all that Universal Parks wanted to show for now? Do you think that this could be a horror attraction built in for the whole thing or is it just there to flavor out all the colorful items on the screen? Let us know your thoughts on all of this down in the comments and of course discuss. For more on this Super Nintendo World and the others though, be sure to keep checking in here as we will keep bring you all that we can for it. Hopefully more in a shorter time.