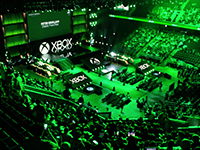 Can't Be At E3 2017 Or The Microsoft Press Conference? We Have You Covered With The Live Stream Straight From E3 2017

Not everything is going to be on the show floor of E3 2017 and because of that we have these huge press conferences and here we go with Microsoft's huge event just before the doors open for us all. Just as the games and announcements they have for E3 2017 not all of us will be able to be there on the show floor to see them as well. Thankfully we live in the age of live streaming and we can watch the press conference through multiple online avenues. Wouldn't you know that we have one right here for you so you are not left out in the lurch on all of the major announcements they have to give us.

This is a big year for Microsoft here as we are going to finally get to see Project Scorpio come to full light. Or at least some kind of light here as it has been promised for E3 2017 with a release before the end of the year. Mix in all of that news with the most likely showing off of a lot of video games coming to the system here, I hear Crackdown 3 coming here, and they could be off to an amazing start for E3 2017 as well as the rest of the year. Hopefully there will be some VR stuff and some more on the HoloLens that was shown a while back and kind of fell to the side. We can hope and that is just what I know I'm going to do while waiting for the other big announcements.

Let's sit back now and have a watch for what Microsoft has to bring us. As with all of these larger press events, keep an eye here for more on what Microsoft has to show off at E3 2017 here as we will be hitting up everything that we can while on the floor at E3. Let us know if there is anything specific you want us asked and looked at from Microsoft down in the comments here.