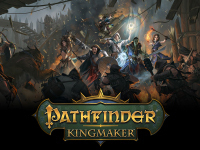 The Kickstarter for a new PC version of Pathfinder: Kingmaker has started and it is looking for help to bring more Pathfinder into the video game realm

Normally I shy away from bringing you information like a new Kickstarter campaign, but seeing as Pathfinder: Kingmaker is near and dear to my heart in the recent years, I felt it needed to be shared. Not because I am attached to Owlcat Games or Paizo in any way, but because I really enjoy the pencil/pen and paper version of the whole campaign and now that duo mentioned before is trying to bring it all into a video game setting for the PC. That is at least if the Pathfinder: Kingmaker Kickstarter campaign is successful and they are able to bring down the $500,000 USD they are looking for. So far so good and they still have over a month to go. So here's a bit more of hope from me to get this thing fully funded.

Now you may still be sitting here scratching your head as to what Pathfinder: Kingmaker is and what I am talking about. As you'll see in the following videos here, it is a PC RPG game that looks to have the same gameplay as titles like Diablo but all with the story and world from the table top setting of the game and campaign of the same name. Think a very epic DnD 3.75 where you get to be the ruler of the lands and you have the very basic knowledge of what we are going on about here. Then again, if you clicked in here then you most like know what Pathfinder: Kingmaker is outside of the video game version looking for funding and may have already clicked off to go support them all.

I know that there are some people out there who may be looking at Pathfinder: Kingmaker and think why would they want to play this adventure in the video game setting. It's a good thought, but like many of the table top games out there, things change based on the person running the game and it looks like Owlcat Games is doing just that by adding in not only the core version of it all, but looking to add in much more to keep it all fresh and engaging for those out there who have played through the original version of the story and crafted their kingdoms already. Not only that, but it sounds like there are plans to keep things fresh by allowing for all of the non-hero kind of play if that is your bag and all. I know I like ruling with fear…

Developer Owlcat Games announces the launch of its crowdfunding campaign for the party-based fantasy video game Pathfinder: Kingmaker on PC. Players will be taken on an adventure through the infamous Stolen Lands, the dangerous and turbulent territories well known within Pathfinder fandom. The computer RPG will revisit familiar characters and well-known locations of the series’ lore as well as treat players to brand new deadly foes and unforeseen twists and turns on their journey through the land. Pathfinder: Kingmaker allows gamers to claim these lands as their own, letting them carve their own kingdom from the wilderness. History and destiny will be shaped by choosing a path of tyrannical rule, subtle diplomacy or trickery and deceit. Subjects of the kingdom and companions in the party will love or loathe these moral decisions and the chosen path will influence the development and appearance of the kingdom’s capital city.

As I said, that Kickstarter campaign for Pathfinder: Kingmaker has only just begun and at the time of this writing they were almost at 15% funded on all of this. There are of course all of the usual tiers of pledging and funding as well as all the goodies that can be claimed here. I for one am on my way to go make sure that Pathfinder: Kingmaker becomes a thing and that we will all be playing it a lot sooner than later; especially since they already have a working prototype for it all and are just looking to make it be the massive thing that the table top game already presents us.

What are your thoughts on Pathfinder: Kingmaker as it all stands here? Do you think this needs to be a game that is made ultimately or do you think it should stay at the pen and paper level forever? Do you think that they will hit their goals and get the game funded or will it all dwindle down in short order and fall short of the hefty goal that they have set? Let us and the world know down in the comments and then feel free to discuss. For more on Pathfinder: Kingmaker, if it indeed becomes a thing, be sure to stick here as we will have everything that we can for this game and more in the coming month. Don't miss out.