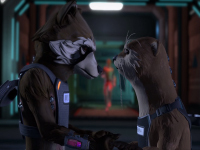 It was no big secret that the second episode of Guardians Of The Galaxy was coming this week as that was one of the big announcements that Telltale Games laid down for us not too long ago. It's landing on the PS4, Xbox One, PC, and mobile devices on June 6th, tomorrow, and it's been hyped up a bit to get everyone ready to continue on the story that has already begun. Mystical artifact, seems to be able to bring the dead back to life, the Guardians Of The Galaxy have it in their hands, and it looks like we may get to see where Rocket started his whole career from. Yes, this is the episode that will be giving the character more of a backstory than most people out there already know. Maybe that will be your selling point for now.

Here we have the new trailer for the Guardians Of The Galaxy episode to look at and it looks like the previously mentioned story may get missed if you are not careful here. It looks like it could be one of the bigger choices in the game and if you don't want to look into the big item in the game for now, you'll get to fly off and check out Halfworld at some point and meet a whole new cast of characters in the Guardians Of The Galaxy universe. Well, their universe in the sense of the cast of characters to guide the story along and not the overall Marvel one as that has been pretty inclusive so far and we've met a whole lot of characters there already. You get what I'm saying hopefully…

Guardians Of The Galaxy — Under Pressure

The Guardians just can't seem to outrun the past (or their tab), but if they figure out how to control the untold power of their mysterious new relic, they might not have to. With help from dubious old friends and unwilling new allies, Star-Lord and company scour the galaxy for answers. But how long can they elude the genocidal maniac hunting them? And will simmering tensions finally tear the team apart?

So far, meaning the first and only episode of Guardians Of The Galaxy, the series here has yet to impress me but given the fact that Telltale Games is looking to go into generally uncharted waters, that could quickly turnaround. It could have been their build up to just re-introduce the characters again kind of fell flat based on the hype that was surrounding the team already and now the reins are off, so to say, and we'll get the top-notch work we know them for. This could also fall flat as to my knowledge it isn't being taken into the comic universe as well like their other IPs, but only time will tell. We'll find out here on June 6th though when we get to dive in and check it all out.

What have you thought of the Guardians Of The Galaxy title so far? Do you think it was a bit rough at first due to the state of the franchise and Telltale just trying to get us all started? Do you think that the branch shown here will lock out some of the story if we go one way or will it only change a few minor things as we've seen in some of their past titles? Let us know down in the comments and, of course, feel free to discuss it all. We'll be giving Guardians Of The Galaxy a further play here soon and we still have three more episodes after this, so be sure to stick around to see and hear all of the future updates for this game and much more.