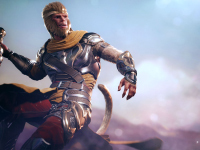 It was only a matter of time before Paragon got it, as every MOBA does have the character type, but it looks like the next hero to land will be a Monkey King style character named Wukong. It seemed like only a matter of time before Epic Games placed this kind of character in there and as of June 6th you will be able to play as Wukong on the PC and PS4 versions of the game. This brings us to 33 different heroes for Paragon by my count, I may be off, but it does look like there are now even more options out there than what came at launch. Not only in the numbers but in the style of it all. Not that we can complain at all as they are all coming to the game for free; at least if you are willing to put in all of the time with the game.

As mentioned, every MOBA seems to have their version of this huge Chinese figure in one way or another and Paragon is bringing him in now. That and as it sounds they are also carrying over some of the character's history in but mixed into the game's lore with a lot of the familiar abilities and actions to boot. Wukong will have both an offensive and defensive stance and it will alter up his abilities in the game based on which is currently active. It will change things like Wukong's double jump into a full air walk or a slam attack depending on the current stance. It will also change up his passive abilities in Paragon as well so it is almost like he will have twice as many than the rest of the game. Interesting indeed…

Have a look at Wukong in action here for Paragon as well as a sampling of all the abilities and powers that come along with him. Then just wait the short time until he goes live tomorrow (6/6/17) on your chosen platform for the game. Hopefully it is the addition you've been waiting for or at least a change up to give you a great new option in Paragon. That and he feels different than all of the other versions that have made it into all the other MOBAs out there. We'll have to wait and see.

Wukong (Order/Corruption) and Feng Mao used to be traveling companions. When Wukong became too much to handle, Feng trapped him in a cave and left. 100 years later, Wukong is free and on his way to Agora to resume aggravating Feng Mao. Wukong is a deadly and elusive melee carry, capable of farming faster than any other Hero.

What do you think about Wukong joining the ranks of Paragon here? Did you think that this kind of character has been missing from the game too long or did you think that Epic Games was going to leave out their version of the Monkey King in this title? What do you think the next hero will be and bring to the game in the next three weeks? Let us know down in the comments and then feel free to discuss. For more on Paragon and the heroes that will be coming to the game, be sure to stick around here. We'll keep digging it all up and try to bring it all to you. As long as they keep their every three weeks plan we should have a lot more to come.