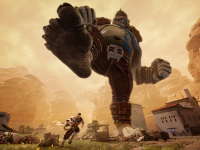 Another new title, Extinction, has been announced just before E3 and we have a cinematic look at Extinction right now

As if we didn't have enough games to look forward to already, it looks like we can add one more to the list as Extinction has just been announced by Maximum Games. While it does have a very post-apocalyptic sounding title, that isn't the case or was developers Iron Galaxy are aiming to bring us. In fact, Extinction's title is more along the lines of what you have to stop while set in a medieval setting where you are the lone hero trying to save everyone from a horde of massive ogres trying to murder everything in the area. You know, because that is just what Ogres do when not falling in love with donkey side-kicks and such. At least that is what we are always led to believe.

Anyways, back to Extinction, it is being labeled as a fast-paced action title where we take on the role of Avil who happens to be the world's last Sentinel who has been equipped and has the skills to stop the seemingly endless waves of Ravenii that aim to make humanity extinct. All while going through a deep story and side-missions to ultimately make the whole task a bit easier and such. Sounds like a RPG system of leveling is in here somewhere but it has yet to be detailed, so that is just speculation currently. Seeing as Extinction is aiming for a lot more skill-based combat though, it makes sense that we can alter the stats over time to make Avil able to do his job and save us all.

Another interesting thing touched on for Extinction is the fact that it will be allowing for us to freely move around the game's world and have a "fully destructible" environment that can be used to our advantage. I'd like to think that Iron Galaxy actually did this for Extinction but having a full destructible environment in a video game causes so many issues when trying to guide players down a story path. Maybe they mean it is only destructible for the smaller items when it comes to the players and the big scary ogres can handle the larger items. They are 150 feet tall after all so that would make sense and still leave the game "closed" to drive a story and have the fully destructible idea in there. I guess we'll see.

Legend calls them the Ravenii, encroaching armies of bloodthirsty monsters that once threatened to destroy humankind. Now, the threat has returned. Iron Galaxy and Maximum Games are proud to announce their thrilling, fast-paced action game – Extinction.

As far back as anyone can remember, humanity has been at war with itself. For generations, kingdoms have fought among themselves while the real threat loomed in the distance. Only those trained in the ways of the ancient order stand a chance at defeating the 150-foot-tall ogres and the armies that trail in their wake. You are one of the world’s last Sentinels, a soldier named Avil, equipped with the skills to battle the endless waves of Ravenii.

In Extinction, you’ll fight massive ogres and their minions across a sprawling countryside, defending cities and rescuing native villagers torn from their homes. Swiftly define your strategy as hordes attack from the ground and air. Use the dynamic skill-based combat system to tactically disarm and dismember enemies before going in for the kill.

Even though Extinction was just announced, it looks like Maximum Games is aiming to bring it to us in Q1 of 2018. It is also slated for the usual big players when it comes to platforms as it is slated for the PS4, Xbox One, and PC currently. Maybe that will open up over time, but I doubt it at this point. Maybe there will be some big news for Extinction that didn't make it into this announcement while out at E3. Those on other platforms who like the concept can only hope for now…

So, when you heard the name Extinction did you think of a different title than what we saw here or was this about right? Do you think that the world will truly be "fully destructible" or is that just a buzz phrase for "mostly destructible" at this point? Do you agree that it sounds like there will be some form of RPG elements here or will it all be a true skill-based game with only minor upgrades coming as the story unfolds? Let us know what you are thinking down in the comments and then discuss. For more on Extinction, be sure to stick around here. We'll hopefully have a lot more on it now that the game has been fully announced.