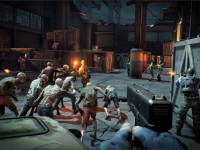 Another zombie multiplayer title, Dead Alliance, is on the way out there and a lot of Dead Alliance looks to build on other title's failures

If you were hoping that the zombie multiplayer game was going to take a break here then you may want to forget that as it looks like we have Dead Alliance on its way to bring us even more of the zombies and more of the four on four multiplayer shooter gameplay. Yes, it looks like we will have another one added into the mix here from Psyop Games and Maximum Games. All on the PS4, Xbox One, and PC on August 29th. Just in time to hit all of the really early Halloween gameplay and hopefully have all the kinks worked out for Dead Alliance by the same time. Not that I think it will be full of them, but it seems like the right timing and such for it all.

So, what is Dead Alliance? Like mentioned, it is a new title that brings us some single player and 4v4 multiplayer in a world where zombies have taken over and warring teams are fighting against each other to survive this horrible new world. All while shooting and killing each other as well as using the undead to their advantage with special gear called zMods. Hmm…Dead Alliance almost sounds quite a bit like another title when you put it all that way now doesn't it. Something that kind of rhymes with Shmumbrella Shmorps. At least on paper and how it is all being described. Maybe the trailer for the game will explain things a little better. Have a look.

Set in a post-apocalyptic wasteland where military bases are humanity’s last city-states, Dead Alliance pits warring teams of players against each other for survival in a world ravaged by the zombie plague. It features a variety of single-player and 4v4 multiplayer modes, including Team Deathmatch, Free for All, King of the Hill, and Capture and Hold, as well as the MOBA-inspired Attrition mode and Solo Survival mode.

Dead Alliance lets players customize and upgrade their loadouts with an arsenal of high-powered, military-grade weapons and advanced zombie-controlling tech called zMods. Examples of zMods include the Enrager – a pheromone bomb that turns a single zombie into a soldier of superior strength and resistance on your side – and the PAM grenade, which puts four zombies to work for you, but does not increase their damage resistance. Use these and many more zMods available in the game to get the undead to join forces with you!

While the high concept and general outline for Dead Alliance sounds to be "lifted" from the other title, it does look like Psyop Games has added in a bit of a fun environment and setting to go along with the game so it isn't trying to be too serious. At least that is the take I had from the trailer and just how the announcer was handling it all. That was something that the other title could have used, besides a lot of bug fixes, and maybe Dead Alliance will give us a new hope for the genre and style of game. Maybe… At least if you haven't given up on the zombie multiplayer style of game just yet.

As I said, Dead Alliance is slated to release on August 29th for the PS4, Xbox One, and PC. Currently it is pre-ordering for $39.99 USD and doing just that will give you the “Rapid Dominance” Day One Edition of the game. This will give you three bonus load-outs with unique weapons and perks to be used in the game but none of the specifics have been mentioned so far. Hopefully out at E3 we will hear a lot more on Dead Alliance and see if it can bring us all back into a genre that has been on the decline for a lot of gamers out there.

How do you feel about Dead Alliance as it currently stands here? Does it sound too close to that other mentioned title to feel completely new or do you think that Maximum Games will have us all back in for a fun new romp? Do you think the humor shown here will carry over very well in the end or will it be all marketing for now? Let us know down in the comments how you feel about all of this and then discuss. As we learn more for Dead Alliance, we will bring it all to you. Be sure to keep checking back in here to see everything that we will have for it.