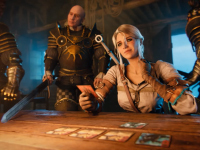 The public beta for Gwent: The Witcher Card Game has kicked off and now players on all announced platforms can get in some games of Gwent to shape the game

Not too long ago the closed beta for Gwent: The Witcher Card Game closed down on the PC version of the game and it gave us all a great glimpse at the game so far, as well as helped iron out some of the kinks in the mechanics to make it the game we all were addicted to inside another game. As of today (5/24/17) though, CD Projekt RED has opened the flood gates to allow everyone in on the beta as the public beta has kicked off. The best part…Gwent will also be available for the PS4 and Xbox One now so we can all get in on the testing and shaping of the game. It seems like a long time coming but given that some of the issues I saw early on in the PC beta, I am glad to be sure that it will start out pretty decent to start already. Bring it all on!

While this isn't an official launch for Gwent: The Witcher Card Game, it is a new chapter in the development of the game and as such we have a new trailer to look at just for it all. A nice new cinematic game to give us a fun feel for how the game should be visualized even though it is a digital card game. I would love to see it all play out as you are about to see, but that would have made this a whole different development cycle for the game and a little more overblown than the original Gwent. Although there will be more like this in the full version of the game, unless things have changed, as there is a story and campaign mode as well. This is just mainly a test for the part that I am sure more will go to as it is multiplayer. None the less we all have it now.

“Public Beta is an important step towards Gwent’s final release,” said Marcin Iwiński, co-founder of CD Projekt RED. “We’re opening the gates to everyone who wanted to play, but didn’t make it into the Closed Beta, and — at the same time — we’re introducing some pretty significant content and gameplay changes like adding animated versions of cards for every card in the game, new starter decks, or how weather cards work,” Iwiński adds. “I’m extra curious how all of the community feedback we’ve incorporated will resonate with both current players and those who’re just starting. Please keep the feedback coming, we’re listening!”

Also, if you've missed out on all of the other updates for Gwent: The Witcher Card Game since last year, shame on you, but also we have a nice new recap of it all to get those players who have missed out all up to date. There have been a few major changes since we all saw it last year as they have been listening to all of the beta feedback and have shaped the game the way the players want. At least in terms of the majority of players as I know there had to be a whole lot of off-the-wall requests that would have broken this version of Gwent for everyone but the one person who requested it all. None the less, have a new breakdown while you are downloading the client in the background.

From the creators of The Witcher series of games, developer CD Projekt RED, comes a different type of collectible card game. Based on skill rather than luck, Gwent encourages use of strategy and deception to defeat your opponents.

In the breakdown video you most like saw that there were five different factions to choose in Gwent here with only a little bit described. While you are still hopefully downloading the client to get in on the public beta, the team has released a new batch of videos that goes into each of the factions a bit more. Of course there is a lot more to each once you get into Gwent: The Witcher Card Game, but these all serve well enough to teach you the broad version of each so you can make your choice a little easier. Each of course has a lot more involved with them in the nitty gritty, but have a look and hopefully find the best for you. Or the Monster faction. They have been my favorite to date but maybe that could change here soon.

Become a valiant commander of the Northern Realms and control the battlefield.

Master the element of surprise and outmaneuver opponents as the deadly Scoia’tael.

Embrace death and become stronger than ever. For Skellige!

See if you have what it takes to lead an army of nightmares from the world of The Witcher.

Learn how diplomacy, subterfuge and infiltration can lead you to victory.

Are you ready for the public beta for Gwent: The Witcher Card Game or are you going to hold out until the full release? Did you get in on the closed beta and looking forward to see what has changed or wanting to see how the experience jumps from PC to console? Which of the factions will you be playing or have you had your main selected and sticking to it? Let us know down in the comments and, of course, feel free to discuss it all. As more on Gwent: The Witcher Card Game is revealed or released, we will have it here for you. Be sure to keep checking in here to be completely on top of all of it until launch.