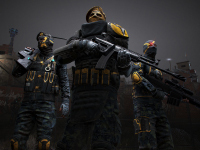 If you are a Season Pass holder for Ghost Recon Wildlands, or just really digging the game and buying DLC one its own, then it looks like you have a new date to look forward to as the second batch of DLC will be dropping on May 30th for the PS4, Xbox One, and PC versions of the game. Ubisoft is bringing the Fallen Ghosts DLC then and it will be adding not only a lot of gameplay extras, but will be bringing on a lot of the aftermath that occurs after the core of Ghost Recon Wildlands' story. You just plunged Bolivia into chaos and now there is a Civil War to get through with a whole lot of innocent humans in the middle of it all. Sounds epic.

This DLC for Ghost Recon Wildlands will bring along with it fifteen more missions with four new bosses all in three different regions. You'll also be getting a new character in the mix that will be starting at level 30 with all of the main game skills unlocked for the character. I'm guessing this is to bring them up to speed on where you should be at by the time you take on this DLC for Ghost Recon Wildlands. Especially since it looks like this DLC will also boost the level cap from 30 to 35 so you can unlock nine new skills, between physical, weapon, and drone skills in the mix. Just like a good little expansion should do for the price.

As I mentioned, this DLC for Ghost Recon Wildlands is part of the Season Pass so there isn't anything those pass holders need to do except download it all on May 30th. If you didn't get the Season Pass already and have been going bit by bit, you'll have to wait until June 6th but it will be available to be purchased all on its own for the same price as always that Ubisoft charges for all of this. Maybe it will be cheaper given the time that Ghost Recon Wildlands has been released, but I'm not going to place bets on that… Fallen Ghosts takes place after the fall of the Santa Blanca Cartel. With Unidad’s military force unable to maintain control over Bolivia, the country is in a state of civil war. To help restore order, the Unidad enlists cartel members, veterans, mercenaries and criminals from various nearby countries as volunteers. Together, they form a new brutal special unit, Los Extranjeros, which is ordered to track and eliminate all American agents.

In this chaotic situation, the Ghosts have one last mission: evacuate the last CIA members and American civilians remaining in the country. Shot down enroute to their mission, the Ghosts find themselves in the middle of the jungle, without external support, facing deadly enemies equipped with the latest gear and technology. These dangerous elite soldiers are separated into four distinct classes:

Are you ready for more Ghost Recon Wildlands and does this new expansion sound like what you've been waiting for? Do you think that the level cap and new character will be part of all of the future updates we get or is it just for this one? How crazy do you think the new missions will be here or will they just be something to pad the game just a bit longer for us? Let us know down in the comments and then discuss. For more on Ghost Recon Wildlands as it comes, be sure to keep checking in here for all the updates. You won't want to miss out if you are a fan.