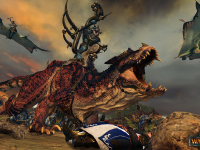 Back in March we all caught wind of Total War: Warhammer II coming to our PCs sometime in 2017 but it was all done in a cinematic trailer that didn't do much but show us that the game was coming and to expect more. No slight to Creative Assembly for what they gave us, but I know I am not a fan of just cinematic trailers and then nothing to go one from there. Sure we found out that there would be elves in Total War: Warhammer II but I prefer gameplay and something more akin to what we will be getting in a final build. Maybe this was a choice by Sega and not the dev team, but it still made me want to see the actual game and not just fantasize about what could be coming in the near future.

Now we jump to today and the latest update for Total War: Warhammer II. Not only do we get to look and hear about one of the other four races to be featured in the game, the Lizardmen, but we get it all in a nice in-engine showing of it all. Again, not gameplay but still it is in engine so we can get a look and feel for what the game could look like in the end. That and a look at the two announced races in the game with a third being teased for E3. All of which will be playable on the show floor for those who want to take the time and search Total War: Warhammer II in the mix of all the madness. It should be good times.

Enough of all of that for now. Let's have a look at the latest in-engine video for Total War: Warhammer II and then get ready to see what the future hold for the game and all of its other big updates. If anything we will only need to wait a few weeks to see and hear all of that.

It is time to march on the Fallen Gates. The Elf servants have blasphemed not just by leaving Ulthuan, but by daring to interfere with the Cosmic Gates – an ancient device that can open a portal into the Realm of Chaos. For such a heinous transgressions, the Elves must be punished as decreed by Mazdamundi, the Lord of the Solar City.

Brought low in millennia past by the daemonic incursions of The Great Cataclysm, their grand civilization now lies in ruin. But a handful of Slann Mage priests still live, and with them hope – that their people may rise anew. Tireless in their quest to restore order to the world, the Lizardmen field a glittering diversity of scaled warriors, from the humble, nimble Skink, to the titanic Carnasaur: apex-predator of the Lustrian jungles.

What do you think of the Lizardmen here for Total War: Warhammer II? Do they look like a fun race to play or will you be holding out for one of the other four that we will get? What do you think of the game visually as this was in-engine but did not specifically show off any of the gameplay we will get to experience when the full game launches? Give us all of your thoughts and discuss down in the comments. For more on Total War: Warhammer II as we come across it, be sure to check back in on the site here. Hopefully there will be more in the coming weeks and not a lot of hang time in between.