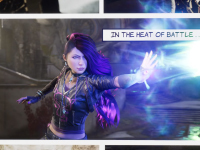 There has been so much going on in gaming recently that I've almost forgot about Paragon and all of the new heroes that are coming to the game. Here we are with yet another on that is coming to the game here on May 16th and she looks to add a whole lot of flair to Epic Games' MOBA title on the PC and PS4. At least as much flair that we can expect in Paragon but it does look like a page was taken from the most recent inFAMOUS title when it comes to powers and abilities. At least if you go with the neon powers and all of that stuff that comes with it. I'm not going to knock it, but it does hold some close looks and abilities.

Here we have Phase though. This is the name of the next hero to join Paragon since three weeks ago as their campaign continues. It looks like she has some quick firing abilities as well as some strong ranged support skills to help here side out and devastate all of the opposition. All of that and she has a pretty stellar look to it all to make it all even more a bit more badass. Have a look at her in action and then get ready to join the fight with her here next week. Enjoy as you are hopefully enjoying Paragon still.

Throw your teammates a lifeline as Phase, the new ranged Support in Paragon. Play Phase in-game on Tuesday, May 16 as part of the V.40 Age of Intellect Update.

While Phase is the latest to join Paragon, it does look like we skipped over another character in the mix of everything. It happens and if you're still having a blast with the game you've most likely been able to play with the hero, but here we go with Revenant. An amazing gunslinger/bounty hunter from the Nether Realm that Epic Games seemed to slip past us for the last update. Yes, he is already in Paragon as you are readying these words, but he looks so amazing and badass that I feel we needed to bring the update here as well. Hopefully you've found him just as fun to play as well as to look at here.

Duel your enemies in the Nether Realm as Revenant, the new ranged Carry in Paragon. Play Revenant in-game starting April 25.

What are your thoughts on this new hero for Paragon we have? Do you agree that she looks a lot like a certain someone from Second Son or is it just me embedding my thoughts on a completely unique character? When do you think they will stop bringing us all new heroes to play with in the game or will it go on for pretty much ever? Let us know it all down in the comments and then discuss. Hopefully we will be able to stay on top of all of the Paragon stuff moving forward. Be sure to stick around here to see and hear all of that in the not too distant future.