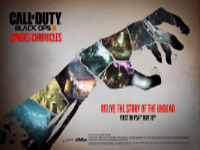 It's fun to see how a little Easter Egg in an older Call Of Duty title has progressed over the many different versions and developers over the years. In this case we are talking about the Zombies mode that was slipped into World Of War by Treyarch and has now become a staple in all of the versions of the game that Activision pays to come out. Now it looks like, for the first time, we will get to see all of Treyarch's versions of the mode in one place as Call Of Duty: Black Ops III Zombies Chronicles has been announced and hitting the PS4 on May 16th. Yes, next week for those who are following along.

Before you get too excited about this being an expansion off the other Call Of Duty Zombies games out there, know that this is a remaster and collection of the story laid out already and nothing overly new. In fact, this collection only has eight of the maps from three different titles that have been selected to give us the narrative that they were going for. Still a really cool idea, but it isn't what Call Of Duty: Black Ops III Zombies Chronicles sounds like it would be bringing us right out of the game. Just take that in for a moment then we can carry on.

What Call Of Duty: Black Ops III Zombies Chronicles will have for us is three of the maps from World At War (Nacht der Untoten, Verruckt, and Shi No Numa), four of the maps from Black Ops (Kino Der Toten, Ascension, Shangri-la, and Moon), and one from Black Ops II (Origins). Each selected by Treyarch to take us on the story driven ride and fighting multiple waves of the undead with all the classic weapons and some from Call Of Duty: Black Ops III that obviously were not in the original maps. Hopefully that will help out with the zombie killing and make it all easier to work though.

Relive the story of the undead in Call Of Duty: Black Ops III Zombies Chronicles, the ultimate remastered Zombies collection from Treyarch, creators of the original Call Of Duty Zombies saga.

Currently there is only a date for the PS4 version of Call Of Duty: Black Ops III Zombies Chronicles but it should be safe to assume that the PC and Xbox One will be getting their go at it. Mainly because it is stated it arrives first on the PS4 and like all of the other DLC and "firsts" that Activision has set up, it should only be a month or so later that we are back into the zombie killing mode on all platforms. At least if all the normal logic stands and they want to make their $29.99 USD from all gamers and not just one group. It is all about making money with the franchise; and the killin'.

What do you think about the Call Of Duty: Black Ops III Zombies Chronicles and what it is bringing? Do you like the map selection or are you curious as to why one of the games seemed to have favoritism over the others? Do you think that this will bring the story into a place where all fans can get into it or will the Zombies mode stay a favorite for a subsection of the fan-base? Let us know down in the comments. There is still a lot more Call Of Duty news to be had this year and a whole other Zombies mode to look at. We will have all of those details here as we get them so be sure to keep checking in on the site for it all.