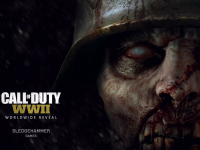 We've had the official Call Of Duty: WWII reveal but that wasn't the only thing shown off for Call Of Duty and it looks like more zombies

Last week we all had a nice showing of Call Of Duty: WWII with the huge reveal event that showed us just how Sledgehammer Games was going to take the franchise back it its roots and era that started it all. We had an amazing trailer shown off, you can see it below, and a lot of praise thrown around but also mixed in were quite a few other tidbits that may have been glossed over or missed. I'm sure Activision doesn't want that to have happened and that is why I am here to bring you what we know for Call Of Duty: WWII right now and up until November 3rd when the game will land on the PS4, Xbox One, and PC around the world. I am sure there will be more, but this is what we have so far.

With Call Of Duty: WWII we will be getting another first-person, cinematic experience that the franchise was well-known for all set in the World War II era. We will be taking on the rolls of soldiers of the 1st Infantry Division as they set out to fight and win this world changing war. Much like other titles in the Call Of Duty line, in WWII we will be travelling off to many different locations and points during the massive war and try to live out through some of its major events and turning points. Events like D-Day and the liberation of Paris will be mixed in there but from the sounds of it all, we should also expect many of the other big battles and some of the minor ones all so we can see the story completely unfold.

Over two years in the making, Sledgehammer Games delivers a gritty, personal experience in the setting of the largest worldwide conflict in history to a new gaming generation in Call of Duty®: WWII. Play through the story of ordinary men turned soldiers in the 1st Infantry Division as they fight to preserve freedom in the face of tyranny. Call of Duty: WWII delivers fast-paced, boots-on-ground combat through iconic locations in the European Theater.

While this may be all that we have for Call Of Duty: WWII in terms of gameplay and mechanics, we do have a few options to pick the game up in for those who have been sold on it just from what we have above. As of right now there are listings for the Base Edition and Digital Base Edition that will run you about $59.99 USD, a Digital Deluxe Edition that will house the game, season pass for DLC, and "more" all for the $99.99 USD range. Lastly we have the Pro Edition of Call Of Duty: WWII that will be a physical version of the Digital Deluxe with a Steelbook case to house it all. That will also run the same $99.99 USD. Sadly, there is no word on the "more" will be in these versions but I'm guessing E3 will shed light on this.

On top of all of that, it looks like Call Of Duty: WWII will be getting its own version of the famed Zombies mode mixed in. While Nazi Zombies are not new to the franchise, it does look like Sledgehammer Games will be having their own take on it all and giving it more of a horror feel instead of the action paced we've seen time and time again. This will also be a cooperative mode with its own standalone story to get our hearts pounding. Hopefully they will be ditching the usual upgrade system in this version of Call Of Duty's Zombies to give it the true flavor they are looking for. Given the horror focus I am going to guess we won't have anything like the other Nazi Zombies we can see below. In a perfect world though…

What are you thinking about everything we had shown off for Call Of Duty: WWII so far? What do you think we will see in the bigger bundles offered up for the game and will it all be digital given the same price points? Do you think that we will get a true horror experience with the Nazi Zombies here or will Activision want them to "reel it in" a bit to stay with the standard that is already known and popular? Feel free to let us all know down in the comments and then discuss. We will be getting more for Call Of Duty: WWII in the coming weeks as well as out of E3 and all of the other major events coming up. Be sure to check back here for all of those updates that we can get a hold of.