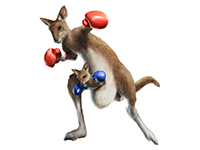 Contrary to rumors going around about Tekken 7, but PETA isn’t the cause of the reason for occlusion of Tekken 7's resident marsupial

Well, it looks to be true that Roger Jr. will not be in Tekken 7, but not due to any complaints from animal rights activists or any weird call from Bandai Namco in terms of development. While Google translate can be a bit dodgy when translating Katsuhiro Harada’s tweets; a bunch of uninformed journalism combined with the rabid Tekken fan base has led to a lot of misinformation to spread like wildfire in the fields of the internet. From what I can gather Harada and the rest of the team are just trying to make the best game they can. If having Roger Jr. in Tekken 7 makes in unbalanced or un-fun then I'm okay with the character being left out. Something similar happened with Eddy before he was announced, but afterward, a lot of the community posted their disdain for him as a cheap and dirty character to use.

Huh? PETA has not said anything. And I said we've worries. What are you talking about.
RT @ChingachgookNM

Harada does have a history of trolling the fans of some things, so while he debunked the rumors of PETA protesting Roger Jr’s inclusion into Tekken 7 he might make him a DLC character. I couldn’t find the original article which made me think right away that this story wasn’t true.

I don’t see the fuss about it though. I have been a fan of Tekken for years and I never saw Roger used as anything more than a joke character. I don’t think the team behind Tekken 7 would try pulling what Street Fighter did and have most of the characters lopped off for DLC. In a TwitLonger posted by Harada detailing how he uses statistical data to help refine the roster for Tekken 7.

Ah it's interview article.
It's a bit different from the nuance I spoke, hm but it's ok
RT @ARPAnetz Good shit, Lord pic.twitter.com/xwhPlEFamc

Detailed in an article from IGN, Harada describes moving a long-running series forward as a sort of balancing act. If you just keep bringing the same characters back the older fans might be happy but the series would stagnate and eventually those older fans will move on to something else. You can’t include every character either or Tekken 7 would suffer in many areas including balance. It’s respectable to the franchise to give the players the best game possible.

Whether it was a rumor that got out of hand, something that happens far too often on the internet, or a mistranslation I will link all my sources below. I do recommend if any more stories like this to go Harada’s twitter to double check. I personally am excited for Tekken 7 which is coming in June to all systems though it has been out in the arcades for a while now. You can read the character list over on the Tekken 7 wiki.