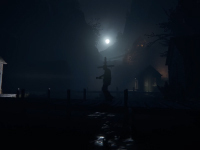 Gods the wait for Outlast 2 has been a rough one. At least it has been for me as I've been super hyped on the franchise since the first time Red Barrels brought the original to us and then followed up with the Whistleblower DLC. It's been a fun four years for the franchise and now on April 25th Outlast 2 will be hitting our PS4, Xbox One, and PC to continue the horror train for us all. In a new setting and theme of terror, but still somehow in the same vein of it all. We'll get to see just how that is here in a few days even though the different location seems like it would make it all a huge leap of logic. I have faith though…

Speaking of faith, that has been one of the big themes of Outlast 2 since its first teaser oh so long ago. Religion has been part of the IPs since the first title and with this one it is supposed to go even further into it all. Especially with the Children Of The Corn vibe that we've been getting since the first gameplay. I'm just curious to see how quickly religious groups take issue with the game once it is out there and all of the horror themes are brought to light. At least if Outlast 2 truly dives into all of the terror that topic can bring about and is out there already. I just hope for those who don't follow the Christian Mythology will feel the fear and not just have to deal with jump scares.

As journalists, you and your wife have a reputation for taking risks and digging into the stories no one else dares to touch, but this time you may have gone too far. Your investigation of a seemingly impossible murder has lead you deep into the Arizona desert, and into a darkness so wicked that no light could ever shine upon it.

No conflict is ever black and white. But once the dust has settled, the victors get to decide who was right and who was wrong. Who is good and who is evil. Human nature pushes us to extremes of violence and depravity, which we then justify by divine inspiration and a promise of paradise to come. Horror rises from desperation and blind faith. Outlast 2 will test your faith, pushing players to a place where going mad is the only sane thing to do.

In addition to Outlast 2 be released there is also the big bundle of all three portions of the franchise with the Outlast Trinity bundle. This is a physical bundle that houses the original Outlast, the Whistleblower DLC, and of course Outlast 2. Pretty much all the great horror that Red Barrels has put together for us since 2013 all in physical form. For those who have missed out for the last four years though this is the best way to get in and see what true horror in video games can be. I still say that Outlast was what started to put the genre back on tracks after the action-horror started to edge the survival-horror off of the shelves.

The original Outlast game released in 2013 and takes place in the remote mountains of Colorado where horrors wait inside Mount Massive Asylum. A long abandoned home for the mentally ill, Mount Massive Asylum was recently re-opened by the “research and charity” branch of the transnational Murkoff Corporation, and has been operating in strict secrecy. Acting on a tip from an anonymous source, independent journalist Miles Upshur breaks into the facility and what he discovers walks a terrifying line between science, religion, nature and something else entirely. Once inside, his only hope of escape lies with the terrible truth at the heart of Mount Massive.

Outlast Whistleblower is DLC that tells the story before and after the events of Outlast to show the final chapter in Mount Massive Asylum’s story. Players take on the role of Waylon Park, a software engineer under contract with Murkoff, who identifies with the poor souls housed in the facility. Fueled by his anger, the stage is set for the unmasking of Mount Massive’s rotten core.

Are you ready for Outlast 2 or are you too scared to hop in and explore the horrors of faith? Have you played the original games or will this be the prompting for you to dive into it all here? How do you think that all the games will be linked together or will it be some small detail that non-eagle eyed gamers may miss? Let us know in the comments what you think and then discuss. For more on Outlast 2 as it comes and goes, be sure to stay locked into the site here. We'll certainly have it all as it comes.